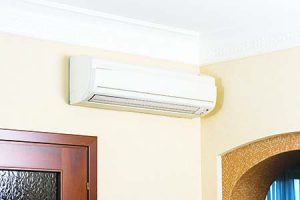 Mini-Split HVAC – These air conditioners operate similar to conventional central units, with refrigerant rejecting or providing heat through coils on the outside of a building.  However, these units are relatively small; they provide heating or cooling for individual rooms or zones.  Similarly, multi-split systems provide temperature control to several rooms through separate air blowers or “heads.”

Looking very much like glorified window units (but much quieter), they are usually wall or ceiling mounted, with a refrigerant line going right through the wall to the outside coils.  Some of the units have efficiency levels more than twice as high as central HVAC because of the use of inverter technology that allows the machines to run at partial load.  Since the full capacity of air conditioners and heaters is only used a few hours of the year, the seasonal savings from running at partial load is huge.  Even more efficiencies are gained because they condition limited space.  Some have occupancy sensors that turn the units off when they are not in use.  Since many of these units provide air directly without ducts, there are no duct leaks into the attic.

These units, however, carry a premium over conventional systems.  At their current price, they will not pay back quickly unless there is large consumption, or in the case of niche markets.  (For instance, a newly-built room may save money by adding a mini-split instead of remodeling the existing ducts or buying a larger central unit.)

The most efficient units on the market at the end of 2016 had a Seasonal Energy Efficiency Rating (SEER) of between 33 and 38, and Heating Season Performance Factor (HSPF) of 12.5 to 15.  (These compare to a SEER of 14 and a HSPF of 8.2 required by national code in 2016.)   A complete list of all mini-splits on the market is available at: ahridirectory.org.

The most efficient units are below 1 ton (12,000 BTUs) of cooling capacity, but mini-splits can be over 5 tons in size.

Geothermal Heat Pumps –Similar to conventional air-source heat pumps, which move heat from or to the air to heat or cool a building, geothermal heat pumps move hot or cold temperatures through plastic pipes buried in the earth or submerged under bodies of water such as lakes or ponds.  The earth stays at relatively constant and moderate temperatures (50 – 70° F) a few feet below the surface.

These greatly reduce energy use.  The best Ground Loop heat pumps in 2016 had an efficiency equal to a Seasonal Energy Efficiency Ratio (SEER) of approximately 49 compared to the national standard for new central HVAC of 14 SEER and a heating Coefficient of Performance (COP) of about 5 compared to a standard air source heat pump COP of 2 or 3.  Water source units, where applicable, have an effective SEER of 70 and a COP of 6.1.  Also, geothermal equipment does not need electric “strip” backup heat, which supplements air-source units when the outside air falls below certain temperatures, raising winter bills.  (Air source compressors function less efficiently as temperatures fall.)

Installing the ground pipe is the major additional cost of the technology.  It can add approximately $2,000 per ton of air conditioning for vertical installations going 300 feet deep.  This amount can be reduced though drilling in volume (such as installing a whole subdivision at once).

This equipment generally has a much longer life than standard air sourced machines.  The plastic pipe buried in the ground or submerged in water carries a warranty of over 50 years.  The compressor itself is expected to last much longer due, among other things, to less stress from using the earth as a moderate, constant-temperature heat source.  Outdoor air temperature extremes of 20° F in the winter and 100° F in the summer are no longer straining the system, as the ground stays at near constant temperature year round.  Some have predicted double the lifetime.

Geothermal heat pumps are even more cost effective in commercial buildings where heating, cooling, and refrigeration equipment run more hours.  Lubbock Christian University has been retrofitting its buildings with great success, and has plans to install these pumps throughout the campus.  Public schools in North Central Texas have also experienced monetary savings on energy bills of as much as 62% compared to schools with conventional systems.

Despite their higher cost, about 100,000 of these units are installed annually.  When added to mini-splits, alternative HVAC units represent about 10% of the residential size HVAC market.

A complete list of geothermal heat pumps on the market is available at: ahridirectory.org.  Local geothermal installers in the Austin area are listed under Austin’s Clean Energy Contractors.

In 2016, the most efficient LEDs on the market saved as much as 58% compared to fluorescent tubes, and as much as  90% compared to incandescent lamps. Once considered a scientific curiosity, lighting and utility professionals foresee a time when LEDs will take over the lighting market for all but very specialized applications.

Efficiency: The most efficient residential products (A19 and A21 lamps that resemble light bulbs) can be found at the ENERGY STAR (Star) Web site: energystar.gov/products/lighting_fans

The most efficient commercial products that can replace conventional fluorescent and metal halide lamps can be found at the DesignLights Consortium (DLC) Web site: designlights.org/qpl

Products are constantly improved and updated.  See company Web sites, or the Star and DLC Web sites, for the latest ones.

Color Quality: Poor light quality allows minimal ability for people to distinguish between shades and colors.  Light sources are rated by a standard called “Color Rendering Index,” or CRI.  Sunlight has a CRI of 100. Incandescent bulbs have a CRI of 99-100.  Most LEDs have a CRI of 80 to 82.

CRI is actually an average of color discrimination for 14 different colors.  If a bulb has perfect (100) CRI for blue but 0 CRI for yellow, colors under this bulb will appear bluish and distorted. The hardest color to appear normal under LEDs is red.  Thus it has become a secondary color standard to rate LEDs for red CRI as well as average CRI.  The spec is known as R9.  The state of California has actually created a voluntary requirement for R9 of 50.  The best lamps on the market in 2016 reached an R9 of 80.

The list below is for conventional (A19 and A21) LED bulbs in 2016 with the highest average and R9 CRI.  See company Web sites, or the Star and DLC sites, for updates. 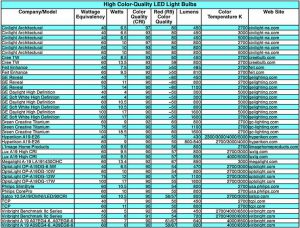