On December 12, 2015, the world reached an important milestone in planning for climate change with the signing of the Paris Agreement. The Agreement confirmed a target of keeping the rise in temperature below 2°C and committing all 196 signatory countries – including the United States – to update and report back on their climate action plans every five years. Austin is well poised to support U.S. efforts with our ongoing climate planning actions, including goals that are more aggressive than those set in the Paris Agreement.

According to the most recent data, in 2013 the entire Austin community emitted approximately 13.7 million metric tons of greenhouse gases that came from four primary sources: energy use and production (primarily electricity and natural gas), transportation, methane produced by landfills, and industrial processes.

The City of Austin is working to achieve community-wide net-zero greenhouse gas emissions by 2050. The City Council-adopted Austin Community Climate Plan contains over 130 actions that will reduce emissions from energy, transportation, and materials and waste sources, and sets interim reduction targets for 2020, 2030, and 2040. The graph of the glide path below shows the emissions reductions and interim targets necessary to meet the net-zero goal.

The Office of Sustainability is working closely with City departments to implement the actions identified in the Austin Community Climate Plan. The initial actions identified to meet the first interim target in 2020 are grouped in nine emissions reduction strategies that include clean power generation, transportation demand management, land use policy and active transportation, landfill methane management, decreasing the energy use in buildings, energy reductions from advanced metering, increasing citywide recycling rates, expanding organics diversion from landfills, and increasing electric vehicle and alternative fuel use.  For more information about climate change in Austin and a list of simple actions to reduce your carbon footprint, visit: austintexas.gov/climateaction. 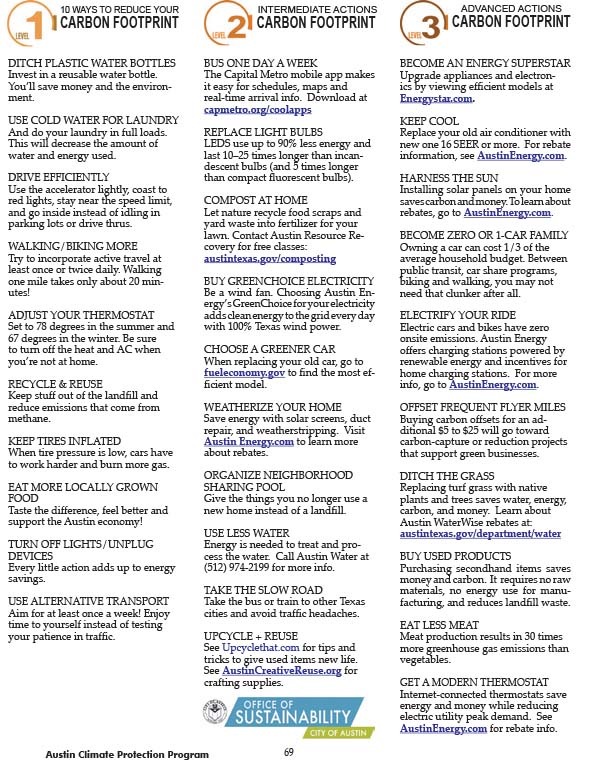