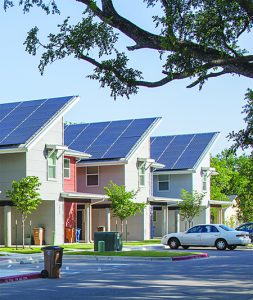 The dedication of four duplexes in the Guadalupe-Saldana Net  Zero Subdivision in 2013 marked an important step on the road to development of net zero energy residences in Austin.  “Net zero” is a term used to describe a home so energy-efficient that renewable energy can offset all or most of its annual energy use.  The duplexes serve as markers as to how net zero should be designed, constructed and — perhaps, most importantly — operated to achieve true net zero energy performance.

This first phase of the Guadalupe-Saldana Net Zero Subdivision consists of four buildings, each containing two dwelling units — a one-bedroom unit on the ground floor and a two-bedroom unit above.  While the buildings are owned and managed by the Guadalupe Neighborhood Development Corporation, the upstairs units in each building are reserved for clients of the Jeremiah Program, a nonprofit that grants educational and employment assistance to single mothers.  The ground-floor units are reserved for people with incomes at or below 50% of median family income.  The Corporation owns and operates the units and pays the utility bills.

Studio Momentum, an Austin architectural design firm, designed the structures to be as efficient as possible while holding construction costs to $110 per square foot. The roofs are oriented to the south with a 30-degree slope for optimal solar exposure.  During the design phase, the Austin Community Design and Development Center performed energy modeling.  The solar photovoltaic (PV) arrays and solar thermal water-heating systems are sized to achieve net-zero energy based on modeled annual energy use.  As there is no natural-gas service within the development, electricity provides energy for secondary water heating, space cooling and heating (via geothermal heat pumps), and clothes drying.

Since March of 2015, Austin Energy Green Building has been monitoring overall electric use, production of the solar PV arrays and energy use of major appliances.  These include the heating and cooling systems, and the backup heating elements on the water-heating systems.

So have all the units achieved the goal of net-zero energy?  Some of the units have done so by a modest margin, while others have missed the target.  Over the 22 months since residents moved in, net monthly energy use has averaged 54 kilowatt hours per dwelling unit.  As anticipated in the modeling process, energy use is greatly influenced by occupants’ lifestyles, habits and awareness.  With respect to heating and cooling, the buildings and the geothermal heat pumps have performed as expected.  Efficient lighting and Energy Star appliances have further reduced energy use.

What Worked?  What Didn’t?

Here are some observations about how the duplexes have performed and factors that may affect that performance.

Were these duplexes successful in achieving the goal of net zero energy?  The answer is “mostly.”  While not all of the units are net zero energy, the mitigating factors are clear and provide valuable guidance as to how to build and operate net zero residences in the future.

Continue to Built for Durability ->