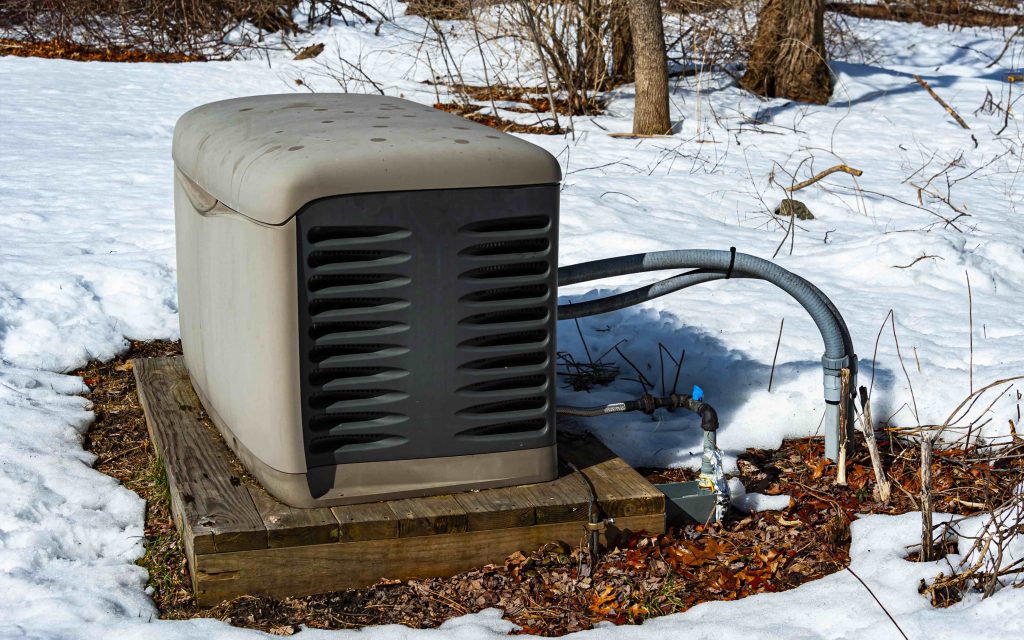 Only homeowners with a backup generator such as the one pictured here would have retained electric system reliability during the extended power outages and sub-freezing temperatures caused by Winter Storm Uri. © Sphraner | Dreamstime.com

Editor’s note: The massive Texas power outages that took place in February 2021 left many people feeling insecure about reliable utility service. This is the first in a series of five articles about the rapidly increasing number of backup power systems being installed in Austin area residences. 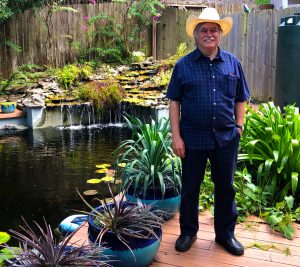 Roger Duncan is the retired general manager of Austin Energy and served two terms on the Austin City Council 1981-1985. He was a champion of renewable energy during his career, and in most ways still is. He recently co-authored The Future of Buildings, Transportation and Power (2020), which discusses technologies available for a low-carbon future.

The massive power outages of Winter Storm Uri in February 2021 convinced him and his wife, Jo Clifton, that they needed a backup power source.

Duncan described the three-day outage as “tough…it was down to 8 degrees.” He was lucky enough to have a wood fireplace, but had almost no wood to burn in it. People in his small neighborhood (rendered small because the hilly streets were not drivable) were sharing wood in the community. However, the common wood supply was almost gone when the power finally came back on after three days.

He investigated backup power options after the freeze. He was interested in the Tesla (battery) Powerwall, but since the Powerwall had limited capacity, Duncan opted for a natural gas standby generator at the side of his house instead.

I asked him to reconcile his new generator with the environmental problems inherent in fossil fuel. He said, “We need to electrify everything that we can (with fossil-free generation) for environmental reasons. At the same time, we need to recognize that there are circumstances where renewables are not going to be able to meet the load.”

“We are talking about a three-day incident in Texas, but in the Northeastern United States, with almost no sun and minimal wind in the winter, it will be extremely difficult to meet heating loads without some burning of fossil fuels.

“There may be advanced renewable technologies that will work better someday. But with today’s technology, you will not be able to meet all the load with renewable energy.

(Disclosure: Roger Duncan is a supporter of the Austin Environmental Directory that I publish.)

Tip of the Iceberg

The story of the Lone Star State’s utility system crash during mid-February 2021 could best be summarized as a tale of Texas-size arrogance.

It is a state so proud and paranoid that to be free of federal regulation it refuses to be connected to electric systems in the rest of the country, even if this disconnection renders consumers helpless for lack of emergency assistance.

It is a state so fixated on free-market ideology that it refuses to enforce regulations that will keep its energy system operable during extreme weather.

It is a state so dismissive of conservationists that it does not require its utilities to do much to ensure that buildings are made more energy efficient, which could protect its citizens during crises and save them money.

When Texas ideology collided with Winter Storm Uri, it was analogous the “unsinkable” Titanic hitting the iceberg.

However, some Austin electric customers are not waiting for the next disaster driven by Texas regulatory incompetence to occur. They are buying their own backup power systems. 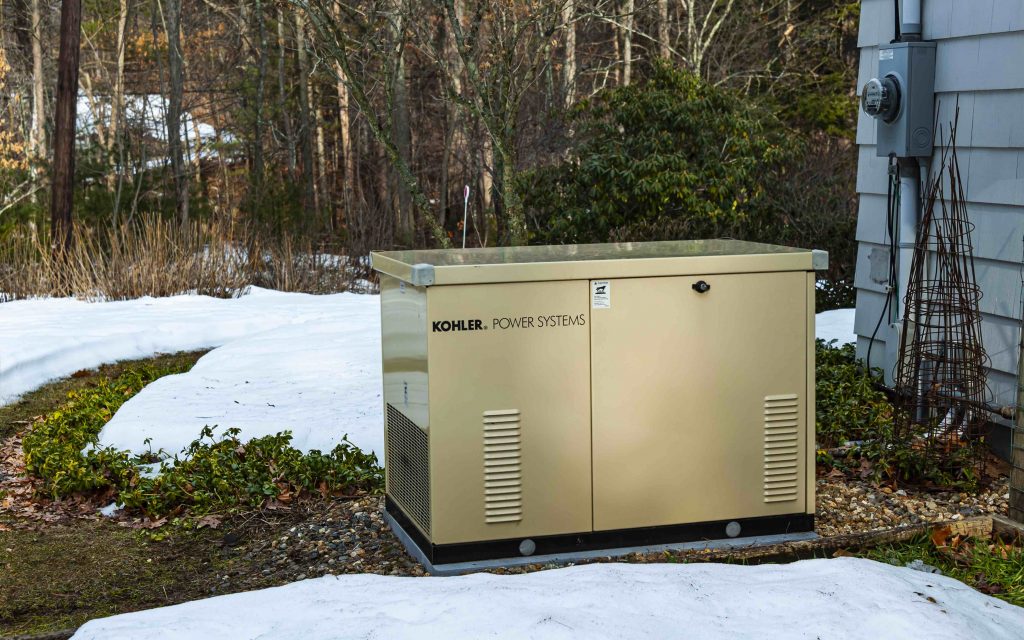 How my interest was aroused

This article began when a friend told me in passing that she and her husband were buying an emergency standby natural-gas generator to prevent another crisis episode like the one they experienced with Uri. Curious, I researched the City of Austin’s building permits.

According to these records, 44 homes in 2020 pulled permits for permanent onsite emergency generation systems. In 2021, the number soared to 164 by July 13th. Projected growth since then indicates that about 560 homes will have applied for permits by end of the year, a net increase of about 1200 percent. This is just for the City of Austin, which has only 3 percent of the state’s population.

This story will discuss many of the financial, technical, environmental, and societal issues surrounding the growing trend for power security. But it is bigger than backup power. This series also details how the state lost power during the winter storm and how Texas government has come up short in efforts to keep a similar crisis from happening again.

Emergency standby generators are decidedly different from the portable generators that are purchased in a big-box hardware store. They sit outside a home on a concrete pad or hard surface, often next to where an electric or gas meter is located. From a distance, they might be confused with air conditioning units, and their noise levels are often similar. While portable generators usually run on gasoline or diesel, standby generators run on cleaner natural gas or propane. 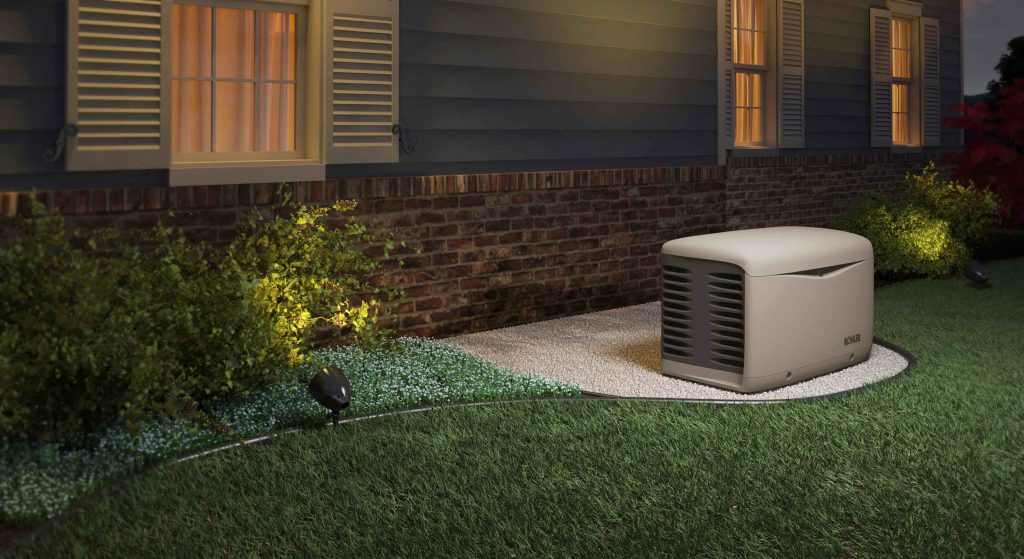 Standby generators come in various sizes but about 85 percent of units sold are 22 kilowatts (kW) or larger. (Contrast this to portable generators that generally range between about 1 and 12 kW.)

Twenty-two kW may seem oversized, given that an average Texas single-family home with central air conditioning may only use about 5 kW at the peak of a hot summer day. However, central ACs and heat pumps need a much larger initial power surge to start each cooling and heating cycle. There also may be surge requirements from other appliances, as well as resistance heating elements, justifying the extra capacity.

According to Brian Lopatka, a junior partner in Canter Power Systems, which installs Generac standby generators for Home Depot in Texas and the Southern United States, the average cost for an installed residential Generac system is about $13,000. Since every installation is unique, this average figure can blur into a range, from $9,500 to $16,000. (Contrast this to portable generators that cost about $230 to $4,000.)

About 65 to 70 percent of the cost is for the generator and materials related to its installation, including a concrete pad (similar to those for air conditioners), wiring, transmission switch, and meter interface. The balance of the cost is for labor, warranty, and remote monitoring.

Joe Rizzo, president of Capital Power Systems in Austin, gave a similar range of installation costs of air-cooled units. He estimated they could be installed turnkey for about $10,000 to $14,000, though smaller units (lacking ability to provide a surge for air conditioning) could be installed for as little as $7,000.

Rizzo, who installs Caterpillar, Cummins, Generac, and Kohler units, said that water-cooled generators have the additional advantages of running quieter, and running longer (past 150 consecutive hours) without maintenance. He said he will be installing 30 of these larger units in the next few months, including a 150-kW unit in a home of about 20,000 square feet.

Residential units on the market today are “smart” and cell-phone connected, so a generator owner can monitor the performance, as well as direct load to specific appliances, from a distant location.

Warranties are generally for a minimum of five years and 2,000 to 3,000 hours of operation, although extended warranties can be purchased for seven or 10 years.

It is important to emphasize that standby generators are not for everyday use. As a general rule, they are expected to run about 200 hours a year. However, with timely maintenance, minimal operating hours, and luck, these may last 20 to 30 years.

Rizzo believes that in many cases he can bring annual maintenance costs (without monitoring) even lower. “We now have whole streets with our units installed. Since a lot of our maintenance cost involves travel time, we can save the travel costs by servicing multiple units on the same day in the same area.”

Generac stated in its August 2021 quarterly Investor Presentation that it experienced a 67 percent increase in residential sales in the last 12 months. In a February 17, 2021 CNBC interview conducted during the Texas blackout, Generac CEO Aaron Jagdfeld said, “We can’t make them fast enough.” To keep pace with demand the company announced construction of a new 421,000-square-foot manufacturing plant in South Carolina that will open in two years.

In the August presentation, Generac estimated that about 5 percent of single-family homes in the United States had standby generators installed. It identified growth markets in: Texas (currently with only 1 percent of homes having standby generators) due to demand driven by the February 2021 winter power failures, and California (with 3 percent of homes equipped) because of grid reliability problems largely caused by intermittent shutdown of power lines to prevent wildfires.

Joe Rizzo currently has 500 generators on order for Central Texas. “I can’t receive them fast enough,” he said, adding that orders were backlogged 50 weeks.

The grid defectors: Who are these people?

The results of my analysis of appraisal district records for the 164 Austin homes for which owners applied for generator permits between January 1 and July 13 of 2021 are informative, but not surprising. 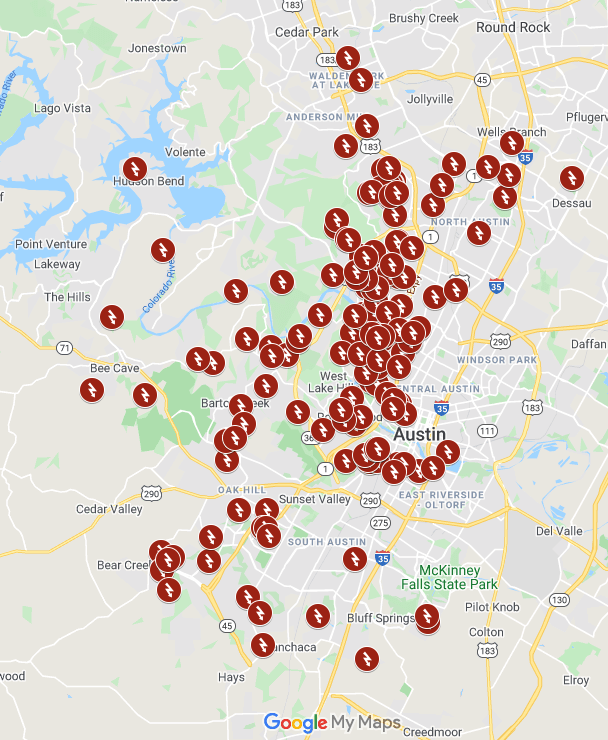 This map shows the homes in Austin where a permit for installing a generator was requested between January 1 and July 13, 2021. Note that almost all are west of I-35. 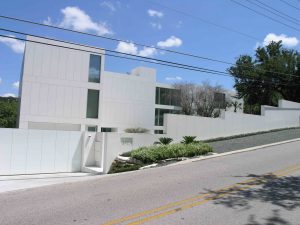 The owner of this 24,000-square-foot mansion on Lake Austin is purchasing a backup generator. The home sits on 1.8 acres and includes a pool, elevator, boat dock, and 2,200 square feet of decks. (Photo by Paul Robbins)

Three-fourth’s of these homes with market values of more than $700,000 had luxury items such as pools and outdoor kitchens, while a few had tennis and sports courts.

Forty-three percent of these home owners claimed exemptions for being Over 65 or Disabled (or both).

Ironically, despite the ostentatious wealth of many of these homeowners the value of backup generators is not currently assessed when the appraisal district is determining a home’s market value. That may change.

In response to the Bulldog’s inquiry, the Travis Central Appraisal District issued the following statement: “Prior to Winter Storm Uri in February 2020, backup generators for residential properties were exceptionally rare and market data did not indicate they added significant contributory value.

“Subsequent to Winter Storm Uri, backup generators are becoming an increasingly common occurrence and the CAD is reviewing the market data and its residential appraisal models as appropriate.”

With about 454,000 residential customers on the Austin Energy system, the overall comparative number of standby generators is still small. However, trends start out small. As example, in 2004, Austin Energy’s solar-power-cell incentive program only gave rebates for 12 systems. By 2020, more than 10,000 solar power incentives had been awarded in the utility’s service area.

Further, permanent emergency generators are an indicator of an even larger trend: portable gasoline- and diesel-fueled generators. These are much less expensive and do not require permits. They are more polluting, noisier, and to a degree, more dangerous due to carbon monoxide poisoning from improper operation. (This will be detailed later in Part 3 of this series in the discussion of environmental implications.) The proliferation of portable generators provides another example of plummeting confidence in the electric system.

Given the loss of trust in the dependability of the electric system that Texas consumers developed after Winter Storm Uri, many are now voting with their wallets and purchasing their own backup generators.

This is the first in a five-part series on how and why Austinites are buying backup power systems. I hope you will be interested in Part 2: “How the Texas electric grid broke: Weather and isolated Texas system created a disaster.”