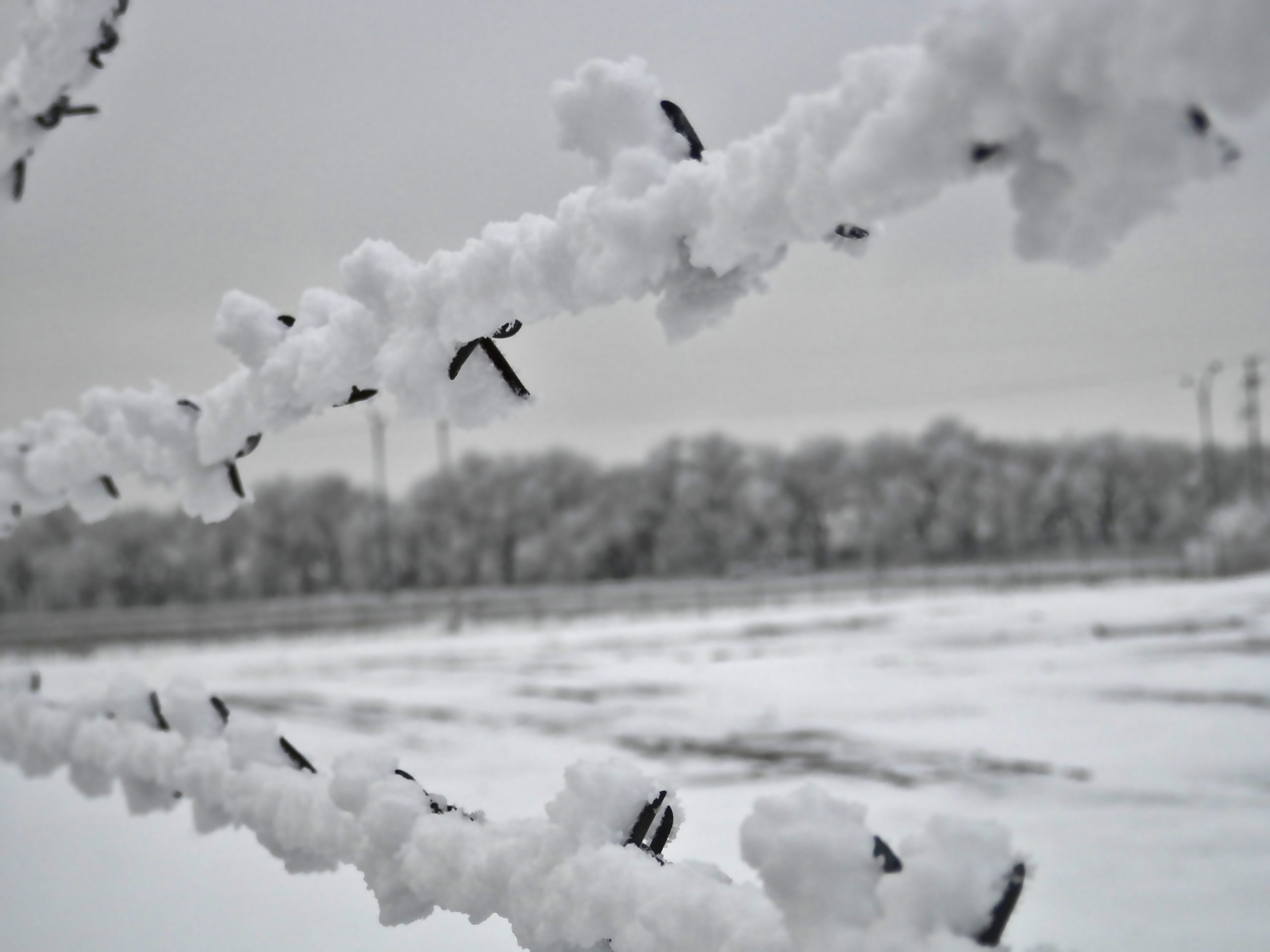 This is the first article in a series detailing energy utility bill hikes that affect everything from household budgets to the world economy.  Given the dynamic nature of proposed utility bill increases, this story may be updated.  However, the best information available at print date is being used.

The series starts with an explosion at a fuel plant in Texas, “travels” half way around the world and back, and reflects on the legends of 18th century pirates.

Life comes with sticker shock.  If you are unnerved by the soaring costs of housing, food, and consumer goods in the post-pandemic reality verging on recession, get ready for the next drop of economic water torture: rising electric and gas utility costs.  They will hit with the onset of winter.

• The utilities that serve Austin, the municipal electricity provider Austin Energy and privately-owned Texas Gas Service, plan to increase costs significantly, or already have. The bills you receive after New Year’s freeze will reflect the full weight of these increases.

• Austin Energy proposes a 13%, $136 a year increase in rates. The way these rates will increase will place a greater burden on low-energy consumers, many of whom are lower-income, while discouraging energy conservation at the same time.  This increase will go into effect in January 2023.

This does not include an additional 18%, $187 a year for other costs.  These include increased fuel costs largely stemming from natural gas to run some of its power plants, and increased regulatory costs that (attempt to) keep the state electric grid from crashing as it did during Winter Storm Uri in February of 2021.  This increase will go into effect in November 2022.

• Texas Gas Service, the main Austin-area heating-fuel provider, also has a rate structure that discourages conservation and hurts the poor. It continues to increase its costs to the point that bills will probably double between 2020 and 2023, increasing by as much as $426 per home.

• Statewide, Texas electricity and gas bills are also shooting up at an alarming rate. The 75% of customers in “competitive” areas of ERCOT (Electric Reliability Council of Texas, which serves most of the State) have increased as much as 69% in the last year.

Competitive areas are so-named because the generated power can be purchased from a number of rival companies chosen by the customer, while transmission of the electricity is billed separately by a common “wires company.”  Municipal utilities such as Austin Energy are not in “competitive” areas, though the term is misleading.  Even though Austin Energy’s bills are shortly expected to experience rate shock, competitive areas will generally have higher prices even after the Austin increase occurs.

Utility energy costs are not just a local or national problem.  Our energy utilities are now inextricably linked to international affairs and the world’s economy.  You may not have heard the explosions of a gas export terminal in a Gulf Coast factory town or on the front lines on a Ukrainian battlefield.  But you are feeling their financial shock waves in your monthly utility bills.  And to some degree, these high prices are undermining the global economy.

This story will go in-depth to explain why these costs are happening.  As an energy writer and activist with decades of background, this author has an enhanced perspective.  I am an intervener in Austin Energy’s rate case that will be voted on by City Council this fall, and have been birddogging the hijinks of Texas Gas Service and its predecessor since the local gas company cut my service off without notice in 1983.

This series will also discuss strategies that can reduce these high prices.  While some of these costs are influenced by international events and the world economy, citizens and individuals, as well as local governments (who presumably work on citizens’ behalf), have some power to stop them.

I have been an environmental activist and consumer advocate living in Austin since 1977.  This background will be criticized by those who interpret the article’s tone as unobjective.  However, even readers who disagree will find this story more informed than most other sources.  Professional opinions, after all, are often based on experience. 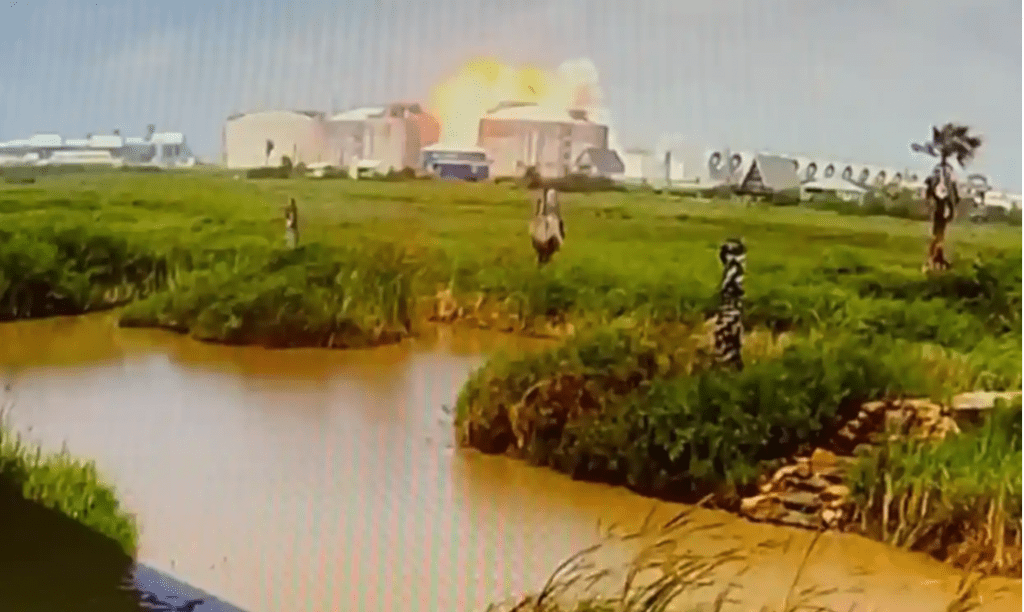 When someone said that Gulf Coast liquefied natural gas exports were booming, they meant it literally.

At 11:40 on the morning of June 8, 2022, an explosion at the Freeport LNG (liquefied natural gas) terminal reverberated across the city of Freeport and the industrial complexes that surround it.  It sent up a fireball 450 high, which could be clearly seen from the neighboring Quintana Beach County Park.  One witness felt her house shake, even though she lived 1-1/2 miles away from the plant.  Another reported hearing the rolling thunder 5 miles away.

A leak in a pipe rack in the export terminal released 120,000 cubic feet of gas, which ignited.  This is a relatively small amount of fuel, equivalent to the combined consumption that only three Austin households use in an entire year.  But like most explosive materials, it does not take a lot to be dangerous.  Fortunately, no one was killed or injured by the accident.

Freeport, Texas is a poor community along the Gulf Coast petrochemical belt at the mouth of the Brazos River, roughly 60 miles south of Houston.  Its poverty rate of 26% in 2020 is almost double the 13.5% Texas average.  Per capita income is 38% below the Texas average, and the population is 84% minority.  Between 2010 and 2020, the tiny city’s population shrank by 11% to its current size of less than 11,000.

Small wonder that poorer people would inhabit the town.  It is surrounded by chemical factories and heavy industry.  Corporate demigods in the area include chemical producers Dow Chemical, Olin Corporation, BASF, the oil refiner Phillips 66, and PVC manufacturer Shintech.  The Environmental Protection Agency Toxic Release Inventory reported that in 2020, 1,698 tons of toxic chemicals were created at factories in or near Freeport.  This is in addition to 6,721 tons of criteria pollutants from combustion, including carbon monoxide, nitrogen and sulfur oxides, carbon soot, and volatile organic compounds.

Thus, the environmental justice movement has inspired a revision of the Big Bang Theory.  Most people do not live near factories that can explode if they can economically afford not to. 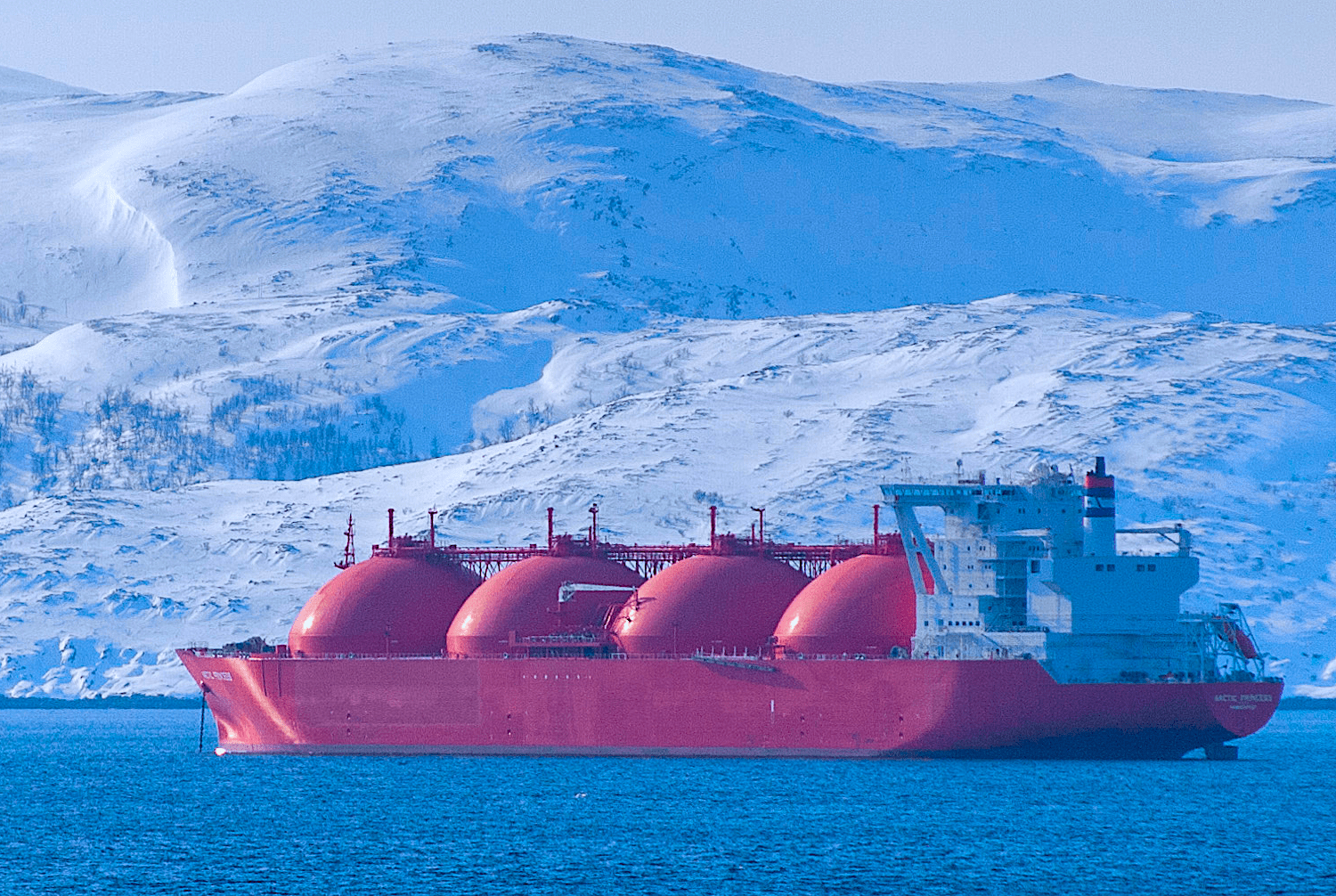 LNG is natural gas that is chilled to 261 degrees below zero Fahrenheit.  It compresses to about 610th of its former volume, and is shipped in some of the longest ships in the world overseas to gas-poor nations that will pay a premium.

Right now, that premium is huge.  Most of Europe has sided against Russia because of its unprovoked invasion of Ukraine.  Russia is punishing the rest of the continent by withholding essential and affordable gas supplies that it has historically provided.  In 2021, Russia provided Western Europe with 39% of its natural gas.

The Russian gas cut-off created international competition for alternative fuel supplies from Texas and other gas-producing states in the U.S. that, until recently, had only been sold on the North American continent.

The U.S. exported virtually no LNG until 2016.  Shift to 2022, when the U.S. is the largest LNG exporter in the world, shipping 11% of its entire production overseas.  Most of these exports in 2022 went to fuel-starved European nations willing to pay outrageous scarcity prices.

Following the Freeport explosion in June, U.S. domestic natural gas prices went down by as much as 42% by the end of the month because there was an unexpected surplus that could not be shipped overseas.  However, European gas futures almost doubled in the same time span, at least partially influenced by the perceived shortage in the international market.

While consumer costs for natural gas in Texas are considerably lower than those in Europe, the state’s current domestic prices are profoundly high compared to recent history.  In June of 2020, this fuel was supplied to Texas at a fraction of the cost only two years later.

The Texas electric system, the Electric Reliability Council of Texas (ERCOT), relied on natural gas for 41% of its power between January and August of 2022.  So electric bills resulted in economic tremors from this volatile price increase.

Austin is fortunate in that its generation mix is more diversified than the ERCOT system as a whole.  Austin receives a greater share of generation from non-gaseous fuels (wind, solar, coal, nuclear) than ERCOT, and is at least partially buffered from LNG-influenced fuel cost increases.  Still, as will be detailed extensively further in this series, Austin Energy has requested that Residential electric bills increase by about 15% just for fuel-related costs, and 32% overall, compared to 2022. 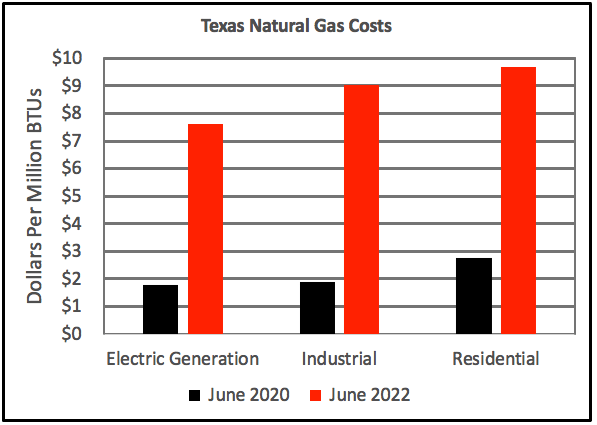 It’s About More Than Personal Budgets

The economic implications of energy costs are not confined to home utility bills.

Energy, including natural gas and gas-powered electricity, represents over 20% of production costs of energy-intensive industries like organic chemicals, fertilizers, metals, and cement.  And this percentage will rise with soaring energy costs. 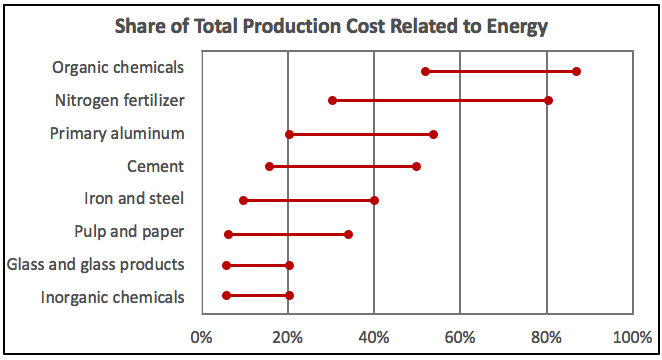 Share of energy costs in total production costs by industry for 2011.

Red horizontal lines show typical ranges for the world.  In chemical industries, energy is used in both the production process and as a raw material (e.g., chemicals for plastics).  Pulp and paper excludes printing.

However, with prices up almost a net 400% above what they were just two years ago, it is inevitable that job-shed will occur if high prices endure.

Obviously, the rise in energy prices will drive inflation as well as unemployment. 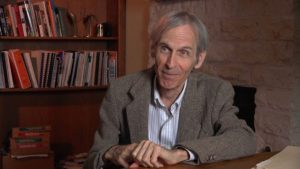 This is the first in a series on how utility bills are dramatically rising locally, statewide, and around the world.