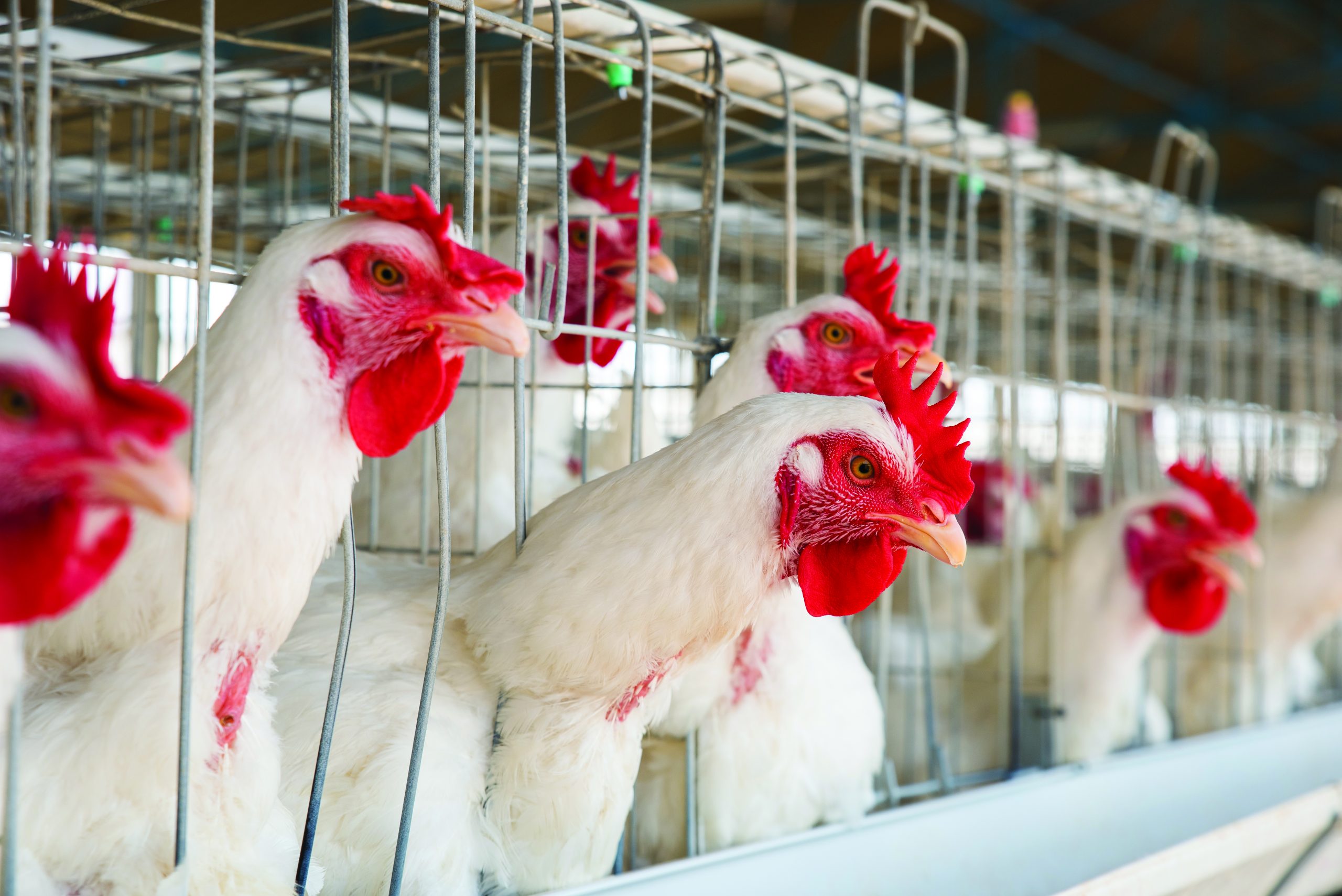 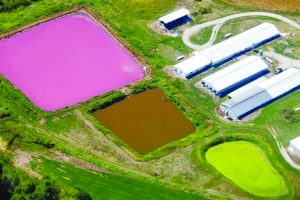 The U.S. is the largest consumer of animal food in the world. It is also the largest producer. The sheer amount of land needed annually to raise feed, forage, and hay for American livestock is equal to the state of California.1 The amount of land used for grassland grazing is equal to an additional third of the continental U.S.2 Conventional pork in the U.S. requires 6 times its weight in grain and processed protein to yield a pound of food.3 For beef, the ratio ranges from 5 to 25; for poultry, it is 3; for eggs, it is 2.

The collective waste (stored onsite in lagoons and pits or in confinement buildings) amounts to 1.2 to 1.4 billion tons of untreated sewage per year. This compares to between 3 and 20 times the amount of treated sewage created by the U.S. human population.4 This manure contains: antibiotics; untreated bacteria and viruses; chemicals for cleaning equipment; heavy metals; pesticides; hormones and growth promoters; and sulfur.

In 2017, there were at least 19,961 large Concentrated Animal Feeding Operations (CAFOs) scattered throughout the U.S.5 An estimate of small and medium operations, some not included in the previous figure, is 63,000.6 This amounts to tens of thousands of large and small animal “factories” polluting their neighbors in a manner similar to industrial facilities, but without most of the pollution regulations that refineries and manufacturing plants must follow.

If you are unfortunate to live in proximity of a large CAFO, you will likely be subjected to the pungent odors of ammonia, the rotten-egg smell of hydrogen sulfide, methane and other volatile organic compounds, as well as nuisance dust from dry manure, feed, feathers, and disturbed dirt on feedlots. Though conditions can vary due to the type of livestock, number of livestock, feed additives, and climate, it is typical for nuisance odor and adverse physical and psychological reactions to occur 3 miles from a CAFO.7 On a bad day, with strong winds and in certain climates, the odors can travel as far as 6 miles.

In 2014, livestock was responsible for 61% of human-made ammonia pollution in the U.S., amounting to 2.1 million tons; this is 90 times more than ammonia released by the domestic chemical manufacturing industry.8 Livestock was also responsible for 21% of hydrogen sulfide pollution, amounting to 3,150 tons; some larger CAFOs literally emit as much of this chemical as oil refineries.9 Agitated manure lagoons can expose CAFO workers to hydrogen sulfide vapors 10 times higher than the lethal dose.10 Yet unlike these rival polluting industries, CAFOs are exempt from reporting emissions, and unless their emissions are extreme, and they get caught (in a state that happens to even have regulations), they are not required to mitigate the pollution.

About 70% of CAFO workers suffer from lung ailments caused by these chemicals; in some cases, they have literally died from acute overexposure to them.11 Neighbors of large CAFOs suffer respiratory and sinus problems, headaches, diarrhea, and increased risk of heart disease, as well as the psychological problems of anxiety, depression, fatigue, memory loss, and sleep disorder.12 In U.S. counties with CAFOs, an increased infant mortality rate of 7.4% was observed per doubling of animal production.13

Studies of CAFO neighbors have also documented decreased property values, increased crime, and a high percentage of people of color living in proximity.14

Animal factories contribute to acid rain and ozone, which damage property, crops, forests, and wildlife habitat.15 CAFOs also damage streams, and eventually even rivers and oceans, by adding nitrogen (from ammonia). This causes acidification, intensifying “dead zones” already caused by agricultural fertilizers, where no aquatic life can survive because the water is depleted of oxygen. Water is also contaminated directly from CAFO run-off and groundwater seepage, which can spread nitrogen, pathogens, and undesirable chemicals in the manure.

The air and water pollution spreads way beyond the immediate radius of harm to neighbors. Acid rain, ozone, particulate pollution, and aerosols (fine, lung-damaging particles created from a combination of CAFO dust and chemicals) are often broadcast over a wide region, adding to damage already created from other pollution sources.16

And since the ultimate destination for the stored manure is land application as fertilizer, air and water pollution can potentially occur at whatever site this fertilization occurs, causing many of the same problems as the CAFOs themselves, albeit on a smaller scale.

Livestock digestion was also directly responsible for 4% of U.S. greenhouse gas emissions in 2017.17 There are even more emissions if one considers energy and fertilizer used to grow feed crops, and used to power the animal factories and slaughterhouses. Emissions are also accelerated by grazing land, which would store more carbon if the biomass was not regularly consumed as cattle forage.