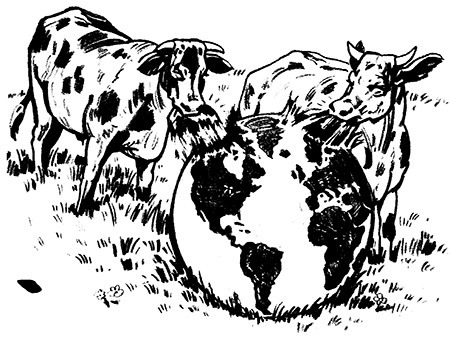 Diet in a Greenhouse World

The agricultural sector represents 10-29% of global greenhouse gas emissions worldwide.1, 2  There are several reasons for this, but the most substantial cause of food-related emissions is animal food.  Energy use and emissions are substantially higher to produce a calorie of animal food than a calorie of vegetables, fruits, and grains.

Below is a chart from one study showing this.  Beef and lamb in the U.S. emit 47 times more greenhouse emissions per unit of food than fruit, and 280 times more than legumes.3 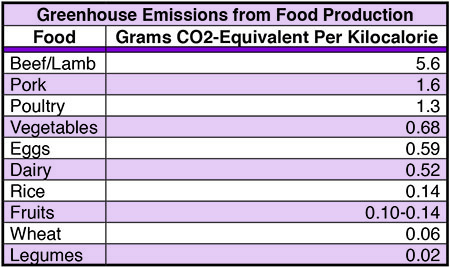 The figures include methane emissions from food digestion in “ruminants” (cows, lambs).  They have complex digestive systems to break down their natural diet of grasses.  (Pork has much smaller digestive emissions, and poultry has none.)4   The figures also include: 1) emissions from energy used in farm equipment: 2) emissions from fossil fuels used in fertilizers and pesticides; 3) releases of nitrogen oxide, a greenhouse gas emitted when nitrogen fertilizers degrade; 4) feedgrains, as livestock must eat several times their weight in grain to yield a unit of animal food.

Not included in these figures are land-use changes from clearing forests for grazing and feed grains.  The cleared land releases the carbon that has been stored in it, and can no longer absorb carbon at the same rate as before.

Individual diets have a profound effect on the severity of global warming when practiced on a global scale.  The chart below shows the comparative effect between a global diet that increases meat (more per person multiplied by a greater population) and no meat.   While a high-meat scenario will create enough greenhouse gases to raise global temperatures much higher than 2˚ C by 2050 (the maximum that many scientists believe will prevent the worst ravages from climate change), the low-meat scenario will reduce emissions to about 1/3 of this dangerous threshold.5 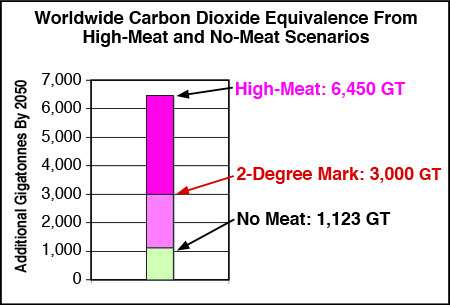 Other strategies, such as more renewable energy and reduced population growth, can also keep temperature change below 2˚ C.  However, the reasons that a low-meat strategy is so effective include: 1) conversion of 22% of the world’s land currently used for animal pasture and feed grains back to forests and grassland (which absorbs more carbon); 2) elimination of fuels and chemical fertilizers needed to grow feed grains; and 3) removing animals that create greenhouse gases as part of their digestive process.

Few countries in the world have a larger carbon footprint per person than the U.S.  One reason is that about 19% of domestic energy goes to produce, transport, package, and prepare food.6  Several things contribute to this large foodprint.

Energy and Animal Food – Most of the world’s wealthier countries get a high percentage of their diet from animal foods.  An outlier to this trend is Japan, which consumes about half the animal food per capita as the U.S.  More animal protein does not necessarily equate to good health, as studies have shown diets high in animal food lead to greater incidence of non-communicable diseases such as diabetes, heart complications, and certain types of cancer.7

Diets high in animal protein consume more energy and emit more greenhouse gases.  Following is a chart contrasting the greenhouse emissions in the U.S. from diets with varying degrees of animal food.  Meat eaters create more than twice the emissions of a strict vegetarian.8 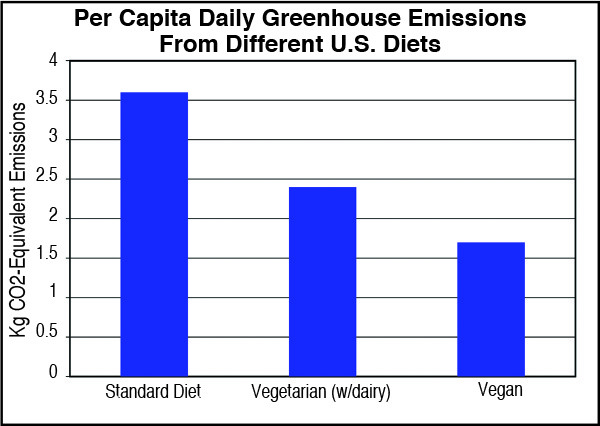 Energy and Food Waste – About 28% of all food in the U.S. is lost at the retail and consumer levels.9  When emissions from production of this wasted food are considered, and greenhouse gases from this waste in landfills is added, it boosts greenhouse emissions from domestic food by 35%.10

Energy and “Food Miles” – Food can be imported from thousands of miles away.  In the U.S., it has been estimated that food travels 1,250 miles from the farm gate to the grocery store.  If supply chains are considered (i.e., farm supplies), food travels 5,120 miles from farm-to-store.11  Transportation from farm to grocery makes up about 7% of total energy used in the U.S. diet.  Another 4% is used to transport from grocery to the final point of preparation.12

Energy and Packaging – About 7% of the energy used for food in the U.S. is related to packaging.13  Huge quantities of raw and processed materials related to the manufacture of packaging, as well as the resources dedicated to their recycling or disposal, compound the environmental and monetary problems associated with them.

A prime example of this is an aluminum beverage can of diet soda, which requires 500 kilocalories (kcal) to produce the soda, 1,600 kcal to produce the can, but has a nutritional value of 1 kcal.14

Five Things You Can Do to Reduce Your Food Print

1. Reduce Animal Food Consumption – The most energy saving (and greenhouse gas saving) personal action that everyone can take is to reduce consumption of animal food.

2. Take Friends/Family to Vegetarian Restaurants – Asking people to buy green power or a more efficient vehicle is a lot easier than asking these same people to change a diet they have practiced their whole life.  Diet is also a matter of social and cultural norms, where people can experience pressure and even ridicule for eating (or not eating) certain kinds of food.

One good way to facilitate a switch is to take them to a restaurant that serves good vegetarian food.  These people may come to find out that eating less animal food actually tastes good, and can be done without sacrifice.  Austin vegetarian restaurants are listed later in this article.  There are many more restaurants in Austin not on this list that are “vegetarian friendly.”

3. Reduce Food Waste – It is tragic irony that while about 14% of U.S. citizens experienced some level of hunger or food insecurity in 2015, 28% of the country’s food is discarded as waste.

Careful meal planning and preparation could reduce a fair amount of this waste.  On a larger scale, unused food from restaurants, grocery stores, and large parties can be donated to food banks and pantries for the poor.

4. Eat Local – Many farmers in the Austin area offer produce and food products at farmers’ markets, farm stands, and even delivered to your door.  This reduces the energy food needs to travel, reduces chemical processing and storage, and often tastes better since it is literally fresh off the farm.  A list of local food providers and farmers’ markets is also provided here.

5. Reduce Packaging – Austin has numerous grocery stores that sell in bulk without packaging.  This allows repeated recycling of packaging for these items. 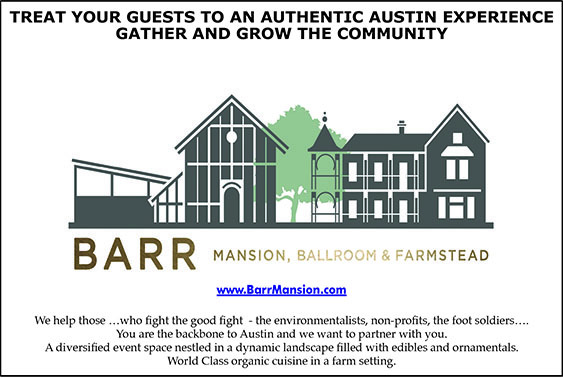 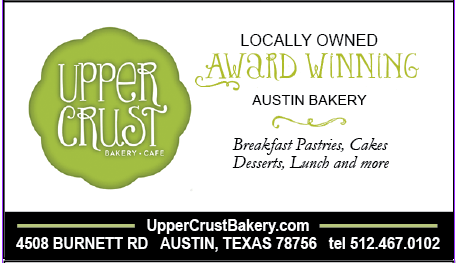