Austin Energy, the City’s municipal electric utility, has proposed building a 500 Megawatt (MW) gas plant as a partial solution to retire 1,337 MW of aging coal and gas generators.  The balance of electricity to replace these coal and gas plants will be provided by renewable energy.

There are a number of factors that are driving the use of natural gas for almost all new conventional power plants built today.  They include:

• increasing power plant air emission requirements, which drive up costs and discourage the use of coal power;

• the huge increase in gas supply from fracking;

• temporarily decreased cost caused by a glut in supply;

Seen in a bubble, gas seems an ideal fuel for a new generation of low-emisson, efficient, and affordable power plants.  The real world, however, does not allow such a simple choice.  A number of complications and trade-offs compete with gas power plants.  Most of these are not considered at the local level where electric utilities install them.  The risks are often national and international in scope. 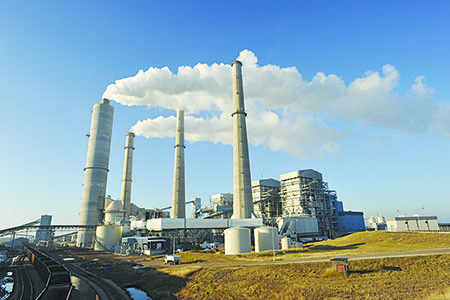 Competing with Coal Plants: Consumption of coal-based electricity in the U.S. has been disintegrating rapidly.  In 2005, it provided 49% of the nation’s electric supply; 10 years later, it was only 33%.1  The biggest reason was that generation from natural gas increased to match coal’s share, from 19% of generation in 2005 to 33% in 2015.

This leads to the question of whether natural gas generation is getting too popular.  It can compete with coal at current levels of natural gas consumption, but when so many other utilities have the same idea of replacing coal with natural gas, it can drive up the demand…and cost…of the new preferred fuel.

The U.S. Energy Information Administration (EIA) is predicting a 25% increase in gas consumption for electric generation by 2040 (compared to 2015).2 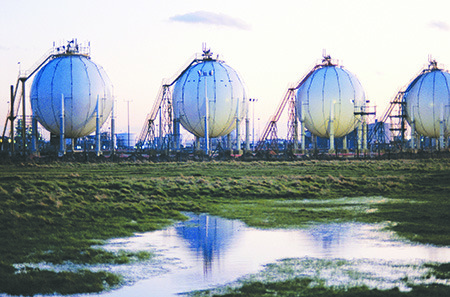 Competing with Chemical Production: According to the American Chemistry Council, about 70% of costs related to plastic resin manufacturing are linked to gas and petroleum, either to power the industrial processes, or as a raw material.3  With a flood of new and relatively cheap natural gas coming on the domestic market, the U.S. petrochemical industry has been expanding to take advantage of it.  EIA estimates natural gas use for industrial feedstocks and industrial heat and power will increase 28% by 2040 compared to 2015 consumption for these end uses.4

More than 261 new chemical production projects had been announced between 2010 and the end of 2015, representing a total value of more than $158 billion; 34% of this investment was already complete or under construction.5 At least $47 billion of this is in plastics manufacturing, which alone is expected to create about 461,800 new direct, indirect, and payroll induced jobs.6 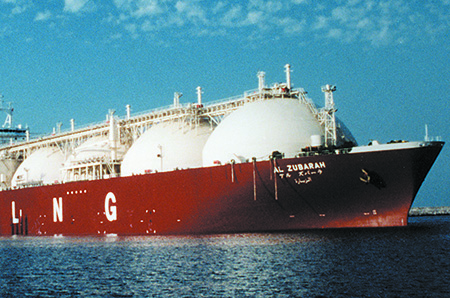 Competing with Gas Exports: At the same time the U.S. is increasing use of natural gas for electicity and chemical manufacturing, domestic exporters of Liquefied Natural Gas (LNG) will spend $57 billion on five chilling plants by the end of the decade.7  They will condense gas by chilling it to 261˚ below zero and ship it overseas in some of the largest vessels in the world.  EIA has estimated exports will rise to 19% of U.S. production by 2040, even though the country has never exported any substantial amount of LNG in its history.8  LNG boosters believe exports will have very limited effect on domestic supply and cost of natural gas.

Uncertainty surrounds the future price of domestic gas, however, even if this staggering level of exports can be attained.  EIA-commissioned cost studies conclude that in the most likely scenario, the increase will be relatively minor, about 8 to 11% in the 2026-2040 time frame.9  In contrast a study done by Charles River Associates concluded that by 2030, gas prices would be 40 and 63% higher under various predictions for increased exports.10 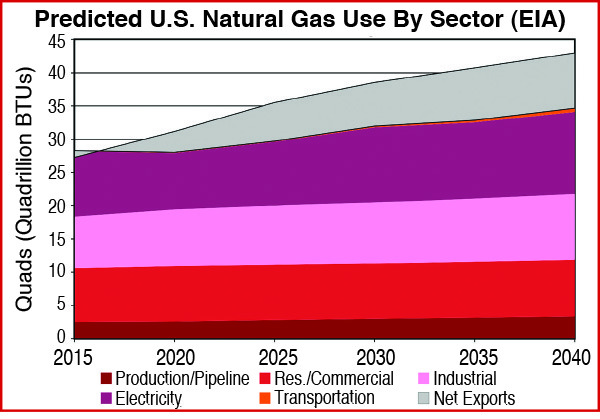 Competing with Supply Limits: The EIA predicts demand for chemicals, electricity, and exports will push requirements for domestic production to unprecedented levels.  In 2015, the U.S. produced 28 Quads of natural gas energy, literally the highest in history.  The Energy Information Administration predicts production will exceed this by 55% by 2040, a level previously thought to be a hallucination.11

Such assumptions have come under criticism by some geologists in the petroleum industry.  A study from the University of Texas at Austin, which looked at shale gas producing regions with a greater level of detail than EIA, suggested that the U.S. will reach a new gas peak sometime in the next decade and then struggle to keep up with demand.12  Another study by Canadian geologist David Hughes is even more pessimistic, predicting that U.S. fracking production will peak in this decade, with total shale gas production about 40% lower than EIA’s forecast.13 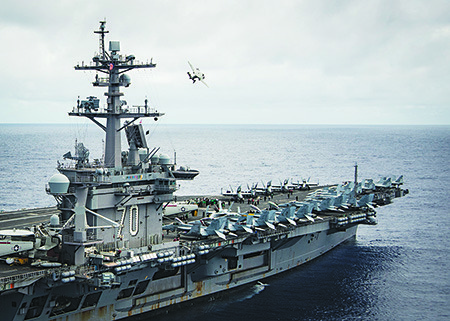 Competing with National Security: It has become common thinking in certain circles of national government that if our country became a major LNG exporter, it would put other energy-rich nations hostile to the U.S. at a disadvantage.

Such is the philosophy typified in a 2011 report by Rice University’s Baker Institute for Public Policy.14

Russia has more leverage on its European neighbors because it currently provides over a quarter of the continent’s gas demand, and may be able to influence China in the future with new export pipelines.

Potential LNG exporters Iran and Venezuela could also increase their world influence if they begin shipments.  Iran in particular is believed to covet nuclear weapons, and in the future, its LNG trading partners might be less willing to challenge this.  So the theory holds that America’s LNG exports could buy time for a change in the Iranian government, and delay Iranian pipelines to India and Pakistan and the influence this could bring to bear on those countries.

LNG exports to Europe and Asia could strengthen America’s influence, and would also reduce the trade deficit partially driven by our country’s obsessive oil imports. 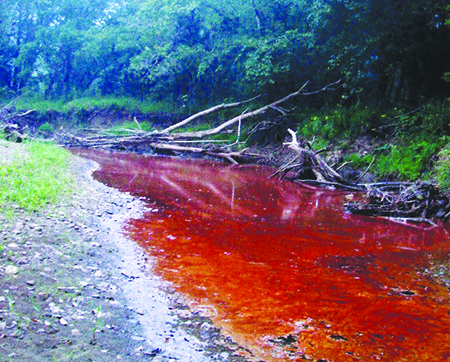 Competing with the Environment:  Since the widespread use of fracking in the late 1990s, there has been a resurgence of oil and gas extraction in the U.S.  This has occurred at the expense of thousands of families (at a minimum) harmed by toxic air emissions, contaminated water, earthquakes caused by wastewater injections, incessant noise from industrial operations, and lowered property values from living near the epicenter of drilling operations.

With notable exceptions, neighbors seeking respect and justice have proved no match for the deep pockets of the oil and gas industry.  It is hard to imagine, though, that the industry will not eventually be checked.  There will just be too many victims.  If the industry does not reform itself, it is inevitable that plaintiff’s lawsuits and government regulation will.  And when this occurs, it may limit the ability to maintain or increase supply levels.

Most people do not take well to being assigned to live in national sacrifice zones.

And Competing with Uncertainty: Assuming that it is even possible for this record amount of gas to be produced in the U.S., is it at all likely?

The LNG industry will not voluntarily decide to go bankrupt in the name of low domestic gas prices.  Will bankruptcy happen anyway if supplies of cheap gas do not grow as expected?

As the environmental effects of this much production become apparent, will residents of rural America, not to mention the general public, tolerate more air and water contamination and earthquake risks in the name of national security and profits for LNG exporters?

Will the chemical industry sacrifice its profits and growth so that Russia will have less political influence?

Will U.S. electric consumers tolerate higher bills because of the LNG exports and chemical industry demand?

Will coal plants make a comeback, worsening the effects of global warming, because the price of electricity gets too expensive because of the competition for natural gas?

The LNG industry, now heavily mortgaged, will not voluntarily decide to go bankrupt in the name of lower domestic consumer prices.  Will bankruptcy happen anyway if supplies of cheap gas do not grow as expected?

These are all sobering questions.  Despite its many environmental problems, until or unless renewable baseload or energy storage technologies appropriate for Texas are found, natural gas is arguably the cleanest electric option – compared to coal and uranium – to balance intermittent wind and solar energy technology.  However, if you read the environmental implications of gas use in the next section, you may conclude that it is only a Hobson’s choice. 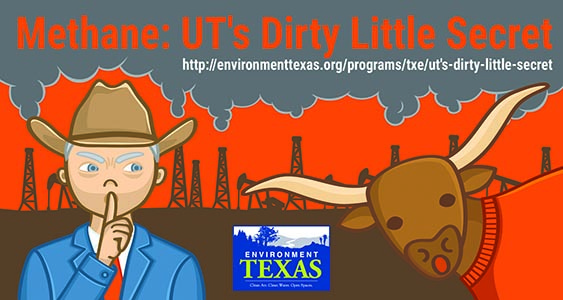 U.S. Energy Information Administration, Dept. of Energy, is hereafter referred to as EIA.