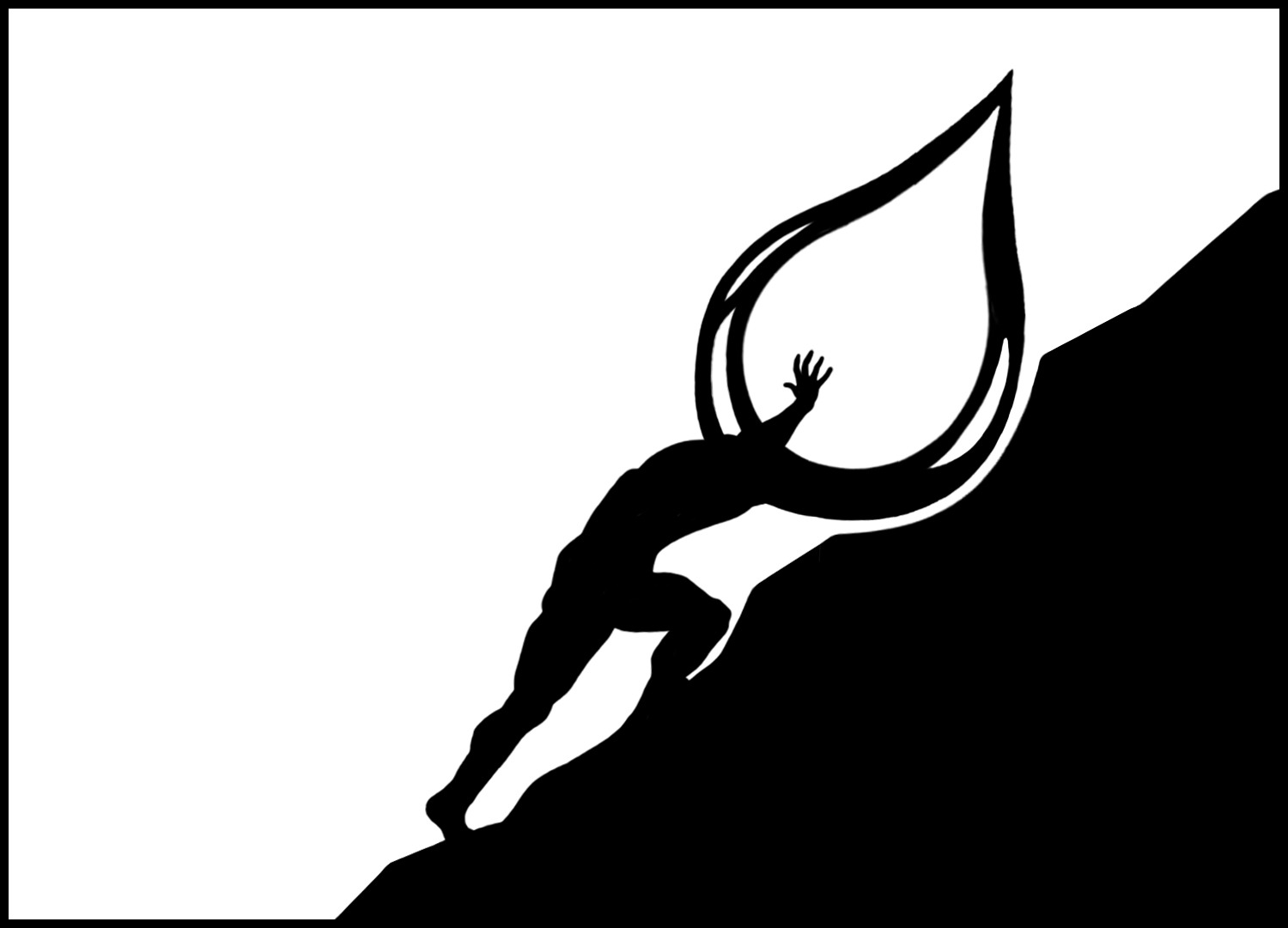 The high price of gasoline today is largely attributed to the phenomenon of “peak oil.”  The theory holds that oil is not running out, but that accessible oil is limited by geology.  Given the immense amount of oil consumed since the late-19th century, extraction has or will soon reach its peak, or half-way mark.  Upon reaching this point, oil will become harder to find and more expensive to produce.  Oil production in Texas peaked in the early 1970s.  The state has probably also reached “peak water” too, though the exact date cannot be determined.

Mixing analogies for oil and water is not perfect.  Oil is a finite substance, while fresh water in the hydrological cycle is perpetually renewing – to a point.  However, it is common for people to exceed the sustainable yield for both local ground and surface water, which Texans have done.  New supplies to compensate for this overdraft and provide for an increasing population will cost more to build, and usually take more energy to provide.

Reservoirs in Texas are a case in point.  There are 108 reservoirs with over 2,000 acre-feet in firm yield in Texas that collectively contain at least 8.4 million acre-feet per year of water supply in drought conditions.1  The Texas Water Plan has identified 26 possible new reservoir sites that can provide future storage capacity.  However, if built, they will only provide about 1.5 million acre-feet, with each new reservoir yielding an average of 24% less in usable water than existing Texas lakes.2

The yield will often be more expensive than water from current reservoirs.  The weighted average cost of these new lakes is about $2.99 per thousand gallons.3  As a point of comparison, Austin still gets the majority of its untreated supply water free, and untreated water in the upstream Highland Lakes currently sells for about 50¢ per thousand gallons.

Much of the cost for these reservoirs is in the pipelines.  For instance, the Marvin Nichols Reservoir, a giant 121-square-mile lake that is proposed to serve the Dallas Metroplex, represents almost 1/3 of the capacity of these 26 proposed lakes.  About 78% of its $3.3 billion estimated construction cost is in the 302-mile pipeline and conveyance system, which will cost $8.5 million per mile.4  This does not include possible cost overruns, water treatment plant costs, and operations and maintenance expenses such as energy used for pumping and leaks in the pipeline system.

These 26 proposed sites are the few still available given the limits of geology, hydrology, and location near major population centers that need the water.  These lakes are expensive economically, at a collective cost of over $12 billion (2008 dollars).5  And they are expensive politically, in that people in these regions of the proposed sites are generally protective of the water in their area.  Even if these reservoirs are built, they represent the last major chance the state has to expand surface water availability.

Not all peak water strategies involve new supplies.  Rather, they involve building pipelines to make use of existing reservoirs in the Eastern and rural parts of Texas.  The (literal) lengths to which these proposed strategies will go is dumbfounding, all the more so because their costs and construction are taken quite seriously.  Two examples exhibit the problems with this approach.

The Toledo Bend Reservoir, at the Sabine River on the eastern border of Texas, is a case in point.  The lake, built in 1969, has huge amounts of unused capacity because it is located far away from the state’s large population centers, and because it is in the area of Texas that receives the most rain.  The Metroplex is so thirsty that 428 miles of pipelines are proposed to bring the lake’s water to the cities.6

The cost would be $5 billion, or almost $12 million/mile.7  The distance, as well as pumping the water uphill at least 223 feet, will demand about 1.4 billion kilowatt hours of electricity annually, enough to power 114,000 Austin households.8,9  Put another way, this project would require 32 times more electricity than conventional water treatment.

At a wholesale cost of $2.65 per thousand gallons, raw water from Toledo Bend would be 81% of the retail cost of Dallas water in 2012, and that is before treatment, distribution, and administrative costs, expensive in their own right.10,11  As a point of comparison, Dallas paid 47.5¢/thousand gallons in 2013 for untreated water.12

San Antonio is an example of a city with extremely low water costs, as most of its supply is pulled directly from the Edwards Aquifer with almost no treatment.  However, this supply is limited, and the city is pursuing less pure sources of water, including brackish water, which costs over 500% more to build and almost 200% more to treat.13

Groundwater availability is also dwindling in two major regions of Texas, the Panhandle and the Gulf Coast.  In the Panhandle, there are three underground water districts, quasi-governmental agencies that regulate the volume of water produced for the benefit of conservation.  All report major reductions in historical groundwater levels.

Along the Gulf Coast, the water table is dropping due to over-demand from a burgeoning population, causing ground subsidence to the point that withdrawals are now severely limited.

Another trait with peak water is that energy use goes up as the quality goes down.  As good quality water becomes harder to find, even lower quality water that is difficult or impossible to make use of in its natural state becomes highly prized.  High electric use in the purification process compensates for the lower quality.

The use of brackish groundwater purified to drinking water standards through reverse osmosis and other desalination techniques is becoming an accepted alternative to fresh water for new supply.  However, a price premium is paid for the equipment and the energy to run it: electric use can be 6 to 44 times that of conventional water treatment.  The same techniques can also be applied to seawater, albeit at an even higher cost.  Seawater uses as much as 75 times the electricity needed for conventional treatment, and again, that is before pumping to the point of use.

Development of Peak Water supplies will be a gradual process, affecting some regions of Texas more than others, and some of these more expensive water sources will be deferred as long as possible.

There are over 500 separate proposals in the Texas Water Plan that cover the 16 regions of the state to deal with the collision of supply and demand.  Several dozen involve conservation, which can offset as much as 23% of demand by 2060 at a wholesale cost of only 32¢/thousand gallons (2008 dollars).15

There are also 44 “reuse” projects (generally called reclaimed water).  These can defer 10% of demand, though costs can range a great deal because there are several kinds of reuse.16

Highly treated wastewater put back in a reservoir or stream (indirect reuse) is often inexpensive because the water would need to be treated anyway; costs could easily be less than $1 per thousand gallons (2008 dollars).

Transporting this same water through “purple pipe” water mains for non-potable purposes such as landscape irrigation and cooling towers (direct reuse) is usually much higher.  The City of San Antonio has a successful reuse system, and Austin has been slowly expanding its own.

And direct reuse for drinking water purposes is quite expensive because of the elaborate (Level 4) treatment required, both for health and social standards.  This cost can be enormously high, $4 to 5 per thousand gallons in some cases, though this might rival new water supplies in certain regions, or be preferable to no water at all.

There are also a number of projects in various regions, ranging from new well fields for municipal supply close to cities, to buying farmers’ water rights, that best the higher costs of brackish water, desalination, and piping supplies from other regions.  However, many of these lower-priced options have limited supply, or are hypothetical at best because of their political conflicts, or are replacements for existing supplies.

One other “cost-effective” option is demand destruction, which is taking place in the Panhandle and West Texas.  No cost-effective option, including conservation, can permanently delay conversion to dryland farming (or fallow acreage) for most of the irrigated cropland.

9 Austin homes use about 12,000 kwh per customer annually.

16 These and all subsequent cost estimates Ibid.