The Texas Weather – Where Erratic is “Normal”

Texans are privileged to reside in one of the most temperamental regions of the U.S.  The state is blessed with hurricanes, tornadoes, droughts that can last years broken by torrential rainfalls, numerous lightning bursts, hail, debilitating heat, and even fierce blizzards in the northern part.  Much of the state also has high humidity, the kind that can magnify heat and cold from something downright uncomfortable into a climate that is sweltering or bone-chilling.  These extremes have contributed to the character of the people, and by extension, the state’s history, in several major ways, including the massive infrastructure needed for its water and electric systems.

Weather records from the National Oceanic and Atmospheric Administration (NOAA) and other sources were analyzed to get some degree of the human toll and property damage from the Texas climate compared to the rest of the U.S.  The time periods for some of these observations vary due to the accuracy or existence of information.  However, the best data available was used to form conclusions.

It is important to note that Louisiana and Florida are higher than Texas in deaths and property damage solely because of hurricanes.2  About 90% of Louisiana’s damage was caused by hurricanes, almost all of this by Katrina in 2005; 82% of Florida’s property damage was hurricane-related as well.  Texas had the highest amount of non-hurricane weather-related damage in the country, though damage to the Lone Star State from hurricanes and tropical storms was also considerable.

Some of this loss is due to the considerable size of the state’s land area and population.  But in all these categories, the state had above-average casualty rates when normalized for both population and land area.   And it is due to its location.

Heat and Heat Stress – Surviving the summer heat is something Texans boast about.  Based on average state temperatures, Texas is slightly cooler than the states of Arizona and Florida.3  But as any Texan knows, there is more to being miserable than heat.  Combined heat and humidity is commonly known as the heat index.  NOAA conducted a 30-year evaluation of 187 cities around the U.S. for heat index in July and August.  It found that 9 of the top 15 most uncomfortable cities in the country were in Texas, including Austin.4

This heat is the cause of prodigious amounts of water use, both directly for commercial cooling towers and landscape and crop irrigation, and indirectly through water use at Texas’ steam electric stations that provide 88% of electricity generated in the state.  About 4% of Texas’ annual water use in 2010 – 289 billion gallons a year – was in power plants, enough to provide the direct needs of 2.9 million single-family homes (at levels typical in Austin).5   This is expected to rise by another 200 billion gallons annually by 2060.6

The heat has also created conditions that drive electric bills.  Between 2001 and 2011, Texas residential customers had the highest average summer electric bill of the contiguous United States for the average of these 11 years, and the highest summer bill in all but one of these individual years.7

Tornadoes8 – The Lone Star state has more tornados than any other state in the U.S.  Between 1991 and 2010, there was an annual average of 155 spotted in Texas, 61% higher than its nearest rival, Kansas.  Measured by intensity, Texas averaged 2.8 strong tornadoes per year, only exceeded by Kansas (3.1) and Arkansas (2.9).

Wildfires – Between 2002 and 2011, Texas wildfires consumed 7.1 million acres, an area 11 times the land in Travis County.11  If focusing on the U.S. mainland, Texas ranks first, with 14% of the total area that is devastated by wildfires.  About a quarter of this damage took place in 2011, coinciding with the lowest statewide rainfall totals since 1917.12  About 85% of this damage took place in years with below-average rainfall.13

Lightning – Between 1996 and 2008, Texas experienced an average of about  3  million cloud-to-ground lightning strikes per year, 13% of all incidents in the U.S., and more than any other state.14  About 28% of the 712,000 acres that burn each year in Texas wildfires are started by lightning.15

Hurricanes and Tropical Storms17 – Texas has more hurricanes than any state except Florida.  Between 1851 and 2006, Florida boasted 113 hurricanes compared to 60 for Texas.  This is in part due to location, as Florida is closer to the source where these tropical cyclones originate.  However, in terms of intense hurricanes (Categories 4 and 5, with winds exceeding 129 mph), the two states are nearly equal: Florida had 8 compared to Texas with 7.

Droughts – Of all the weather conditions that afflict Texas, droughts are probably the most profound – 18% of all drought incidents in the U.S. between 1993 and 2012 occurred in Texas.18  Crop damage is hinted at in the chart in this section, though it is understated.  As an example, NOAA data suggests damage to Texas crops in 2011 was only about $1.6 billion, while an updated estimate made in 2012 suggested it was about $7.62 billion.19

Drought is a relative thing.  There is no specific number that defines it.   A drought in Connecticut can occur at the same time West Texas experiences normal rainfall.  But the New England “drought” may produce 3 times as much precipitation as El Paso gets in an average year.

Nor does Texas set the bar for the number of consecutive years below normal rainfall.  The drought of record for Texas lasted six years during the decade of the 1950s.  There are other states, both wetter and dryer, that exceed this.

Instead, drought is a state of regional carrying capacity defined by its water needs.  Plant, animal, and human communities become dependent on a certain standard of “normal” water supply.  When this gets interrupted, the absence of water wreaks havoc on survival and economies.

The average rainfall in Texas is lower than most other states in the U.S., but not by any means the lowest.  However, there is no state in the country that is as hot as Texas that is also as dry as Texas.20

Florida and Louisiana have hotter average temperatures than the Lone Star state, but they also get more rain.  Arizona, New Mexico, and California get less rain than Texas, but they are cooler.  This pattern holds true to most regions within states as well.   Of course, even Texas cannot compete with Death Valley in California, but then they don’t try to grow corn there.

You can flee a coming flash flood, repair a hail-damaged roof, rebuild a house after a tornado or fire, and sweep up after a dust storm.  How do you outrun or repair a drought?

As global warming caused by fossil fuel emissions intensifies, it poses an ironic challenge for Texas.  How do you define the new normal in a state where being normal is being erratic, and where the landscape is already scarred by weather hazards?

Since global warming is predicted to exacerbate existing weather extremes, scientists, using historical records and computer models, have made predictions about what might be in store.

– More air conditioning will be needed to accommodate for this increased temperature.22

– There will be decreased sea life in the Gulf of Mexico due to warmer water that will hold less dissolved oxygen.23

– The Texas coast, which already has one of the highest rates of subsidence in the world, will be further impacted by rising sea levels.  Between 1999 and 2099, global warming is expected to raise sea levels 0.6-1.5 feet at various coastal locations, and as much as 3 feet when land subsidence is taken into account.24

– Deaths from Excessive Heat Events are expected to increase in almost all large U.S. cities by staggering multipliers between now and the end of the century.  San Antonio is expected to increase from 21 to 35 deaths per year; Dallas from 46 to 190, and Houston from 2 to 27.25

Other climate models predict that altered rain patterns below the 1950s drought of record will become common.27 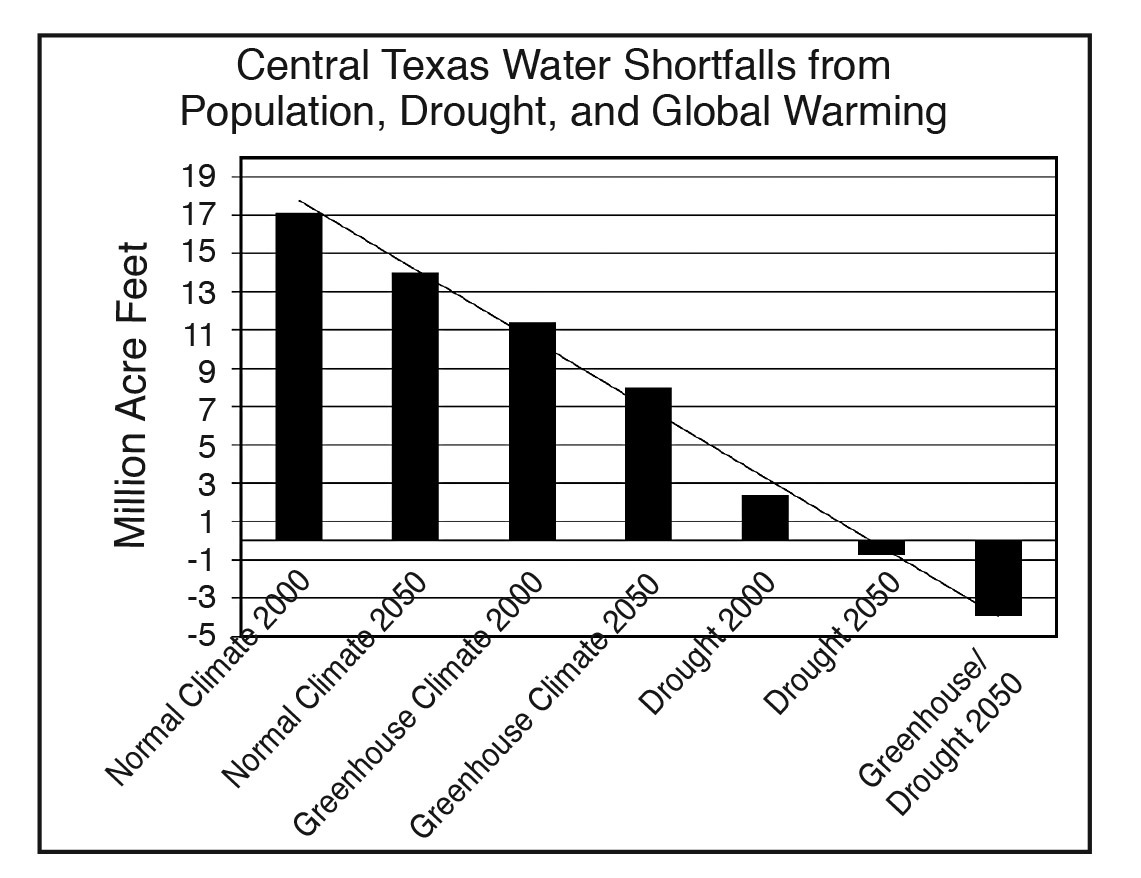 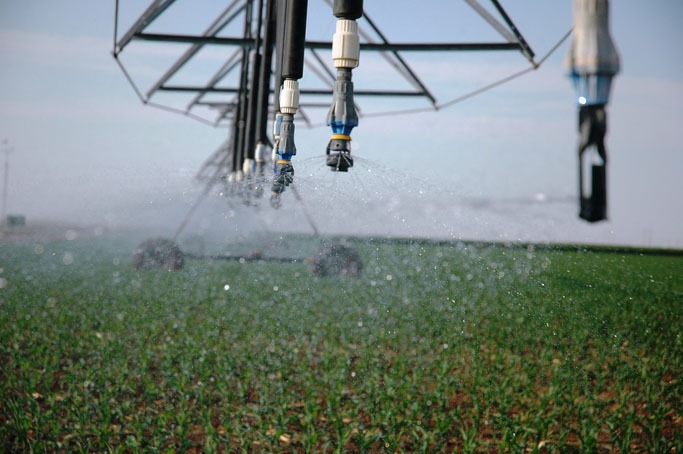 Texas is a major farming state.  In 2010, it produced enough food (including corn, wheat, rice, sorghum, and sunflower seeds) to feed about 59 million people on a calorie basis.26  Unfortunately, about 40% of this is grown in areas that do not have a sustainable water supply.28

Given the dry and windy climate in North Texas and the Panhandle, a considerable amount of the farming is supported by irrigation, which is provided by the Ogallala Aquifer.  It is known as a “fossil aquifer” because it is not sustainably replenished – instead, its resource is “mined.”  The Ogallala has virtually no recharge (in most parts of Texas, this is about 1 inch in 42 years), and its water levels go lower almost every year.  Yet it has been used to irrigate crops since the early part of the 20th century.

Some farms in this region have already switched to dryland farming, which typically reduce yield 42-76% in 2010.29 (This assumes these farms even convert to dryland farming; it is possible that some of the land will be retired from agriculture altogether.)  Continued drops in this water table are expected to create a 60% shortfall in irrigation water in the region over the next 50 years, even after water conservation techniques and equipment are adopted and installed.30  Given the situation, regional planners and farmers are literally planning to phase out irrigated crops as the Ogallala continues to fall.

This is not a major blow to the Texas economy.  Food and fiber production contribute about 9% of the state’s gross domestic product, and crop loss in this one region will not greatly impact it.31  However, there will be economic losses to this local area, as well as the loss of food for at least 14 million people on a calorie basis (based on 2010 yields).32

Another center for irrigation is along the Colorado River downstream of Austin.  Texas grows about 6% of the rice in the U.S.33  In 2011, about 57% of the Texas share came from the Colorado River Basin, enough to feed 1.2 million people on a calorie basis.34  There is considerable debate about the future of rice farming for this area.

On the one hand, the Lower Colorado River Authority, which manages the river basin for 10 counties, states there is enough water to continue agricultural production.  The LCRA is also working to acquire more water sources.

But alternately, the 2011 Texas drought, combined with the considerable population growth of the region, caused the first prohibition of irrigation water in the region’s history.  Rice farmers are uneasy about a trend in which their water and the livelihoods that depend on it become expendable in the face of the needs of cities and industries.

While rice farmers paid LCRA  $28 per acre foot in 2011 for raw water to irrigate rice, Austinites paid about $1,600 per acre-foot for treated water to grow grass and manufacture microchips.35,36  Water flows upstream to money.

The manufacturing sector creates many times the wealth from a gallon of water that a farmer does.  But in the battle between potato chips and microchips, it is often forgotten that people can’t eat microchips.  There are 7 billion people currently on the planet, with almost  2  billion more expected by 2050.37  However, Texas will no longer be able to provide the volumes of food to the world that it does today.