The state’s water planning agency, the Texas Water Development Board, may have its faults.  However, no one can accuse the agency of not thinking big.  It is planning on water supplies for 21 million people that, for the most part, are not even here yet.

The agency has been in existence in some form since the drought of record in the 1950s.  Its current task is to create a plan every 5 years that directs policy and plans projects that will provide water for an exploding population.

To accomplish this daunting task, the Board operates an elaborate planning process for each of 16 separate regions of Texas.  A broad range of representatives are appointed to each of these 16 planning groups, from water utility professionals to industrial customers to environmentalists.  With the help of paid technical experts, these regional planning groups try to determine water demand and supplies as far as 50 years in the future given population growth and available water resources.

In its most recent Texas Water Plan, released in 2012, the agency is planning for an increase of 21 million people, an 82% increase from its base year of 2010 by 2060.  What is particularly interesting is that about 60% of the increase  is projected to come from people moving into the state.2

This challenge to find adequate water supplies is made even steeper due to the loss of 30% of current (2010) groundwater resources by 2060.  This is caused by lack of recharge in the Panhandle, and a switch to surface water supplies in the Houston area due to ground subsidence caused by over pumping.  Silting of reservoirs will reduce water supply even more.

In the 2012 Plan, Texas is trying to increase its peak-demand water supply (for high consumption in severe drought) by 9 million acre-feet – over 50% of its current (2010) maximum supply.  (See chart.)  An acre foot – about 326,000 gallons–will serve about 3 Austin-sized single family homes for a year.

This 9 million acre-feet of water supply and conservation is projected to cost as much as $53.1 billion.  However, a major misconception about this plan is that all of this will be needed and built.  Only about 5 million additional acre-feet of increased water demand is actually predicted.  So the 2012 Plan becomes a sort of wish list of water projects, with some projects falling out due to high costs or political opposition.

The 2012 Plan also predicts that $178 billion in additional funding will be needed for new water and wastewater treatment and distribution, and flood control.  It also does not include any water or money to address the water needs in streams, rivers, and bays to keep them healthy.

On the good side, the assumptions for the 2012 Plan are fairly transparent.  The staff of the agency has gone to considerable effort to answer questions about the details of its plan on any number of occasions.  The Plan has also resulted in a huge level of support for conservation and water reuse.  However, there are also several major flaws.

One is that each regional group had its own resident consultants that was paid by the state to assist with the process.  Some of these firms derived significant income designing water infrastructure.  As an example, the Dallas-Ft. Worth Metroplex plan was staffed by the engineering firm of Freese and Nichols, the same company whose original cofounder (Marvin Nichols) helped propose a large and controversial reservoir in Northeast Texas.3  The proposed project is named after him, and this firm could receive substantial income if the project were ever built. 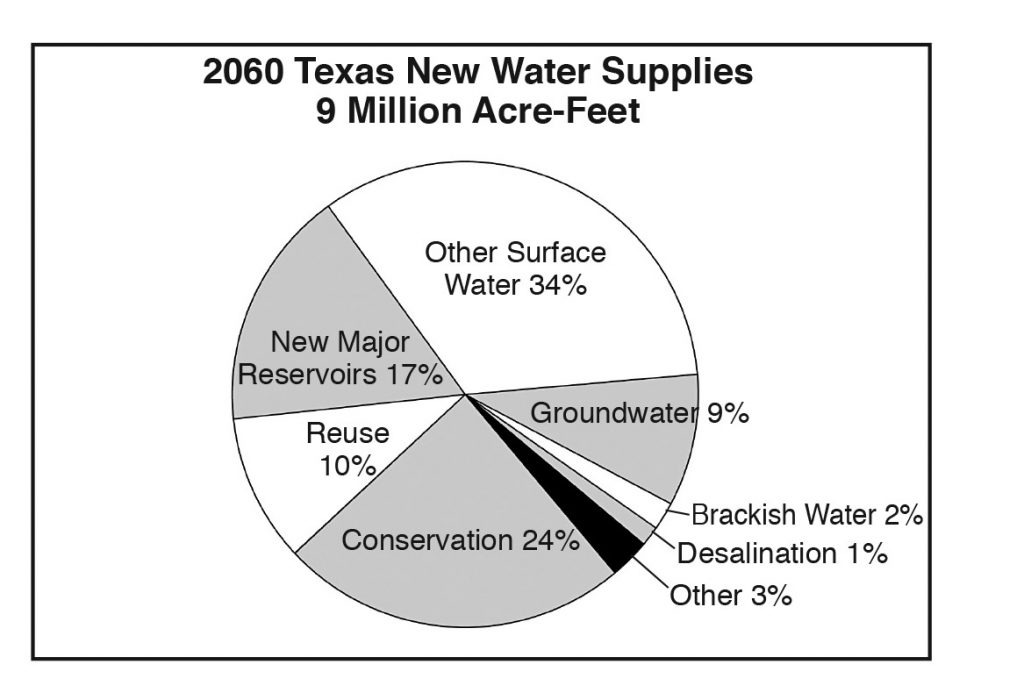 Another problem with the Plan is that the per capita peak-demand water use in most major Texas cities is predicted to stay relatively steady between 2010 and 2060, despite increased efficiencies in water-consuming fixtures and appliances, rising water costs, and landscape efficiency regulations being enacted in several large urban areas.  No explanation is apparent in the Plan.

A third flaw is that a key underlying assumption of the Plan is that the Texas economy will suffer without more water for population growth.  The economic effect of lost income is actually calculated for each of the 254 counties in the state. The Water Plan further portends the looming economic consequences of not spending this money: $116 billion annually and the loss of 1 million jobs a year by 2060.

The problem with this approach is that much if not all of this lost income is for people who do not live here yet.  If Texas did not grow, the current population would not be heavily impacted.

The prospect of maintaining Texas at a stable population level is never discussed. If this heretical thought were ever brought up, the rhetorical answer is to dare anyone trying to stop growth to build a wall around Texas to stem in-migration.

This sarcasm fails to acknowledge that the lack of water will create a virtual wall of its own.  If people can’t obtain enough affordable supplies to provide for the needs of a water-based culture and economy, they will move elsewhere.  There will be fewer jobs by virtue of there being fewer people.

A History of Unrealized Predictions4

There have been eight water plans issued by the  Texas Water Development Board since 1961 when the process first started.  The Directory reviewed six of them that were published prior to 2003 to assess how close they came to being accurate.

As a general rule, the plans came extremely close in their predictions of population increases.  There was never a prediction that was off by more than 10% from the U.S. Census, and some projections came within 2% of the Census numbers.  However, they have usually overstated the water necessary to meet demand. 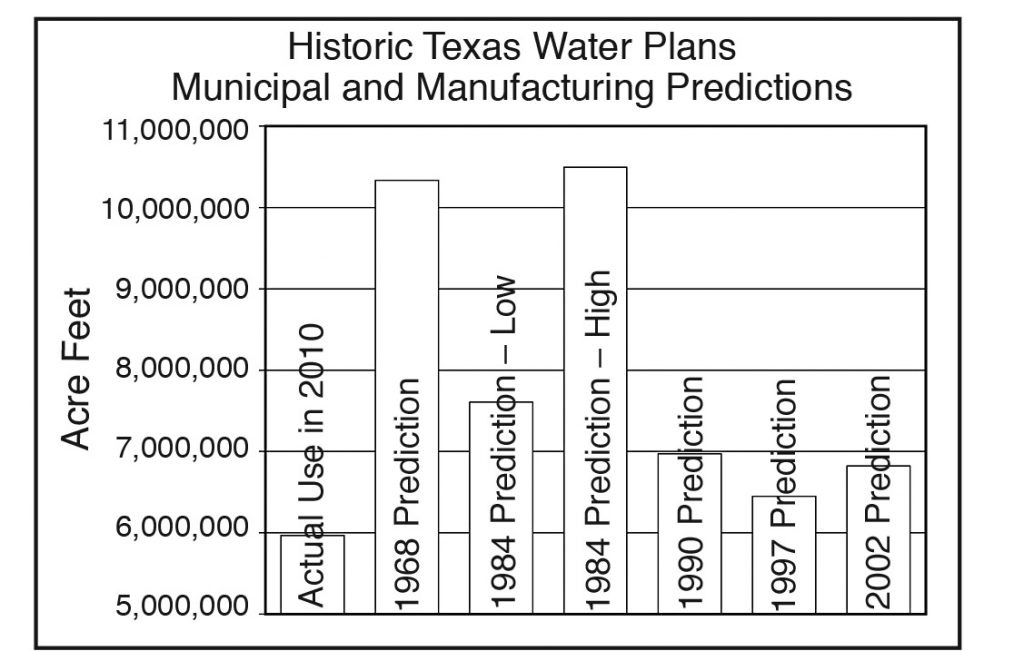 To be fair, many of these plans estimated use based on drought conditions or below-average rainfall, and 2010 was not an extreme weather year.  It is also difficult for anyone to make predictions decades into the future.  Still, the long history of missed predictions has led critics to believe that the plans intentionally or unintentionally reinforced the need for high-cost supply options sought by special interests.

The most outrageous of all these efforts was the 1968 Plan, which predicted water demands so incredulous that they could only be met by importing water from the mouth of the Mississippi River.5  One import channel would parallel the Gulf Coast, while the other would cross the border to Northeast Texas, and then send the water to Lubbock, where it would be rerouted to farms in the High Plains, West Texas, and New Mexico.  About 63% of the water would have been used for agricultural purposes in Texas.

The Plan was as bold as it was arrogant.  It would have been the largest public works project in the world’s history.  Two concrete-lined channels, totaling 1,200 miles in Texas alone, would convey water from the mouth of the river.  It would construct 62 reservoirs inundating 4,500 square miles of land.  It would require 7,000 Megawatts of power (1/3 of the electric capacity in Texas at the time) to pump the water, much of it more than 3,200 feet above sea level.  The channels would have to cross 142 natural rivers and creeks.  The gambit would have cost $9 billion (in 1968 dollars), $3.5 billion of which would come from Texas, with the rest coming from the federal government.

The Plan would have wrought havoc on the ecology of the lower Mississippi, and would have been heavily subsidized by taxpayers.  One analysis determined that the farmers the water was destined for could only afford to pay about 7% of the real cost.6  Yet a ballot item the next year that would have changed the Texas Constitution to allow the state to finance the project failed by less than 6,200 votes.

1 Most of this section was taken from TWDB, Water for Texas, 2012 State Water Plan.  Online: www.twdb.texas.gov/waterplanning/swp/