The invention of the modern dishwasher can be traced back to Josephine Cochrane in 1887. Cochrane was the wealthy granddaughter of John Fitch, the inventor of the steamboat.  She did not originally invent the machine for money, but because her house servants were chipping her fine china when handwashing them.  Her invention was unveiled at the Chicago World’s Fair in 1893.

The novelty did not translate into utility until the 1920s, when it was attached to plumbing for commercial use.  It was not until 1947 that it made its way into residences.  While theoretically non-essential, about 59% of U.S. homes in 2009 used automatic dishwashers, which clean an average of 215 loads a year.1, 2  An older, inefficient dishwasher can use about 2,000 gallons a year, equivalent to 2% of an average Austin home’s water use.

Chart 1 shows the progression of water efficiency over time.3  Standard-size dishwashers from the 1960s could use 16 gallons/cycle.  Even as late as 1993, they often used 10 gallons/cycle.  The federal requirement was set at 6.5 gallons in 2010 and 5 gallons in 2013.  The voluntary standard in effect in 2019, set by the Consortium for Energy Efficiency, was currently a much lower 3.5 gallons, and the most efficient model on the market in 2019 was 1.65 gallons/cycle. 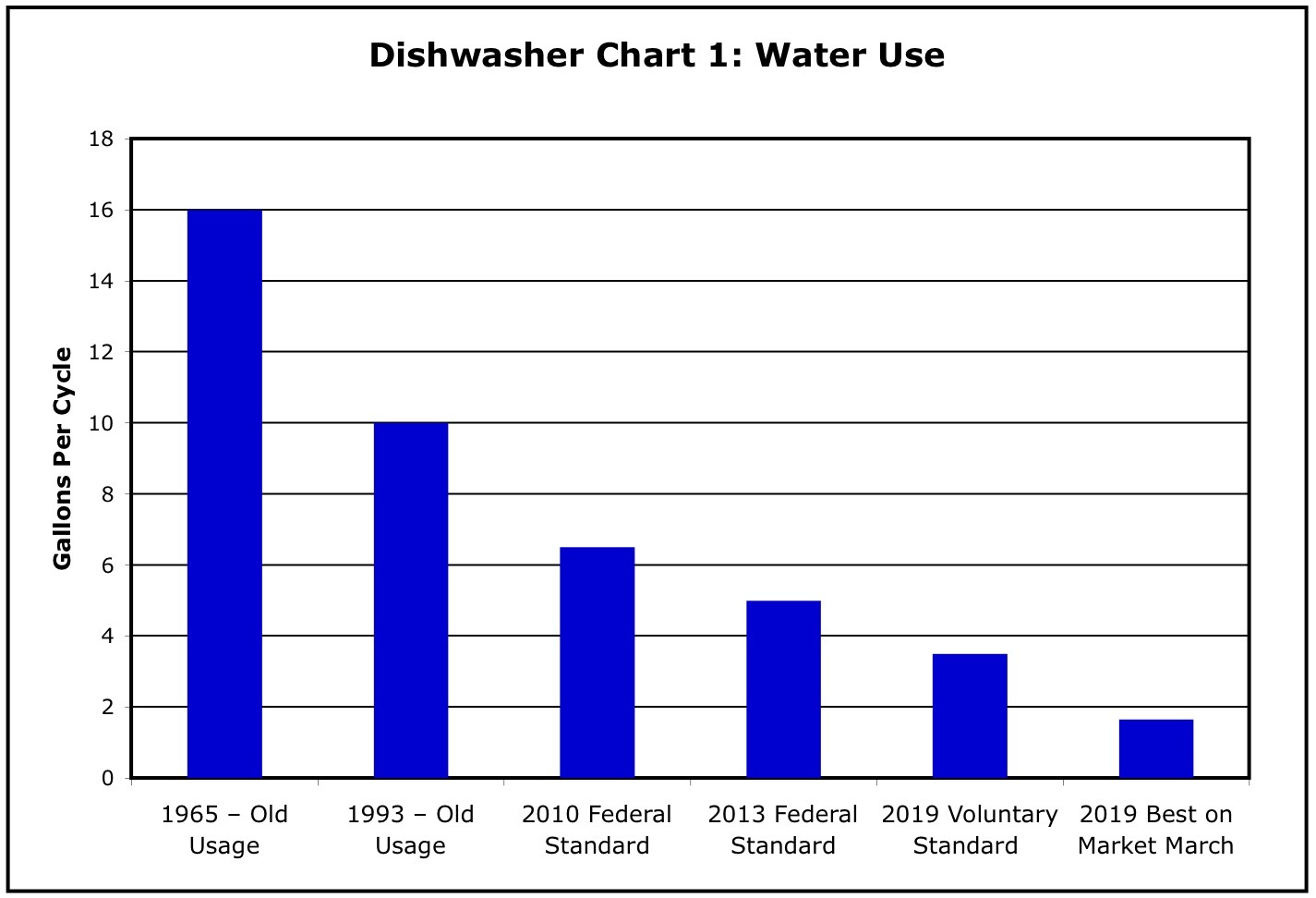 Energy use has also changed dramatically over the years, as shown in Chart 2.4  Prior to the first federal requirement in 1994, consumption for a standard-size unit was 2.87 kwh/cycle.  It changed to 2.17 kwh/cycle in 1994.  The current federal requirement is 1.43.  The best voluntary standard in 2019, from the Consortium for Energy Efficiency, is 1.26.  The best machine on the market is currently rated at 0.93. 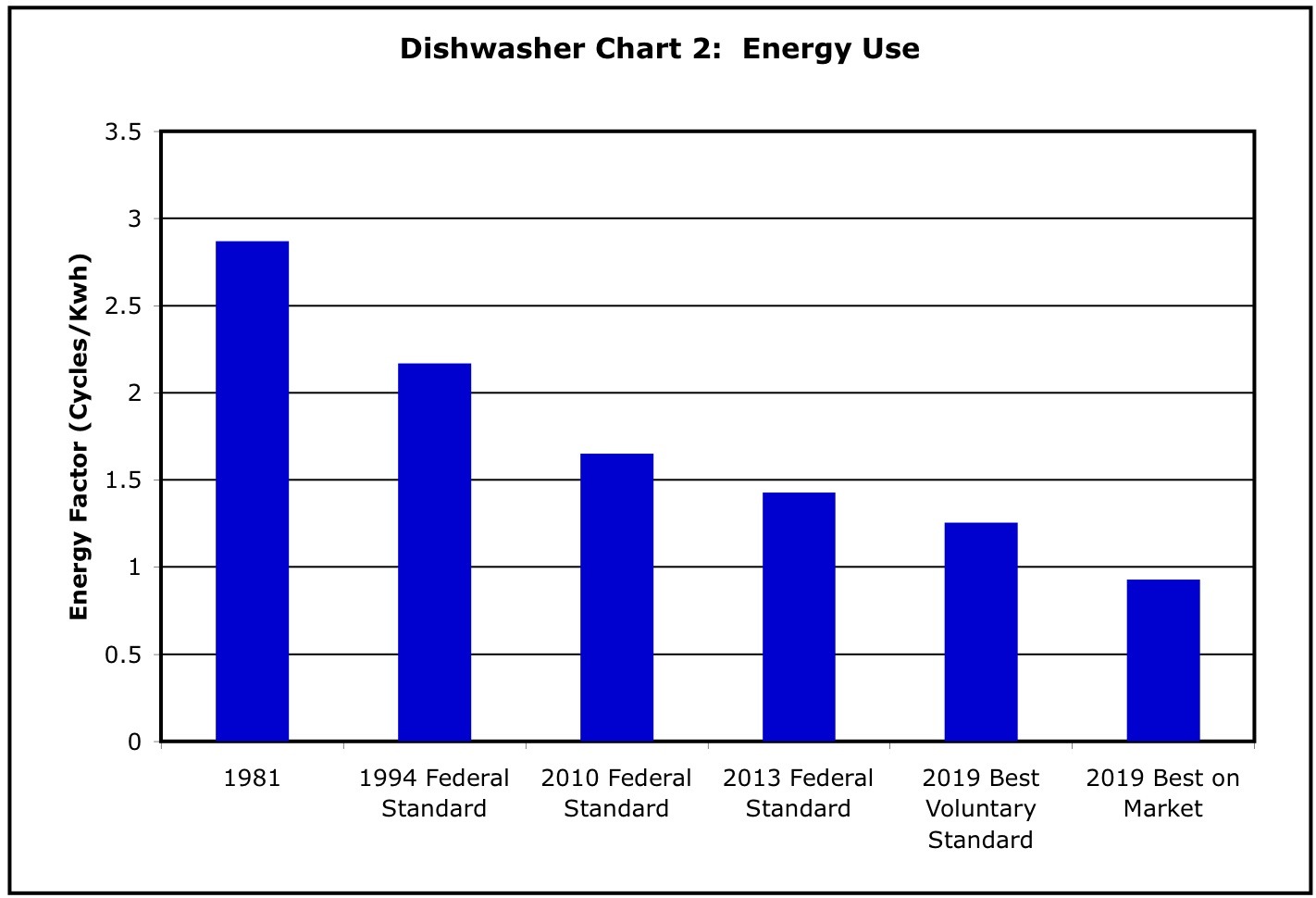 There has been considerable discussion and research about whether more water is used when washing dishes by hand vs. machines.  Either answer can be correct depending on your assumptions.

Dishwashers substitute manual force with very hot water, water jets, and refined detergents to clean dishes with minimal water use.   If you use an efficient dishwasher, water use can be as little as 2 to 4 gallons per load.5  It would be difficult to wash dishes by hand with this small amount.

However, 70% of households rinse their dishes thoroughly before placing them in the dishwasher, which can add 10 to 15 gallons per load.6  This might be because of: 1) habit; 2) trials that have found the dishwasher less effective without it; 3) they are waiting several days to get a full load to wash and do not want the dishwasher to create a health problem.  So hand washing is sometimes the winner.

Energy savings from dishwashers can also be ambiguous.  Electricity is used for the operation of the machine, stand-by electronic controls, and water heater boosters in the machine.  However, considerable energy from water heaters is also consumed to preheat water entering the machine.  If one assumes that less water is used, and heated, in automatic dishwashing, an efficient dishwasher may come out the winner.  However, dish soap and scrubbing can take the place of some or all hot water use.

Add to this the fact that many homes are designed with their water heaters far from the point of use, from 15 to as far as 100 feet away.  Since a typical efficient dishwasher uses small amounts of water at a time, and the washing cycle can take as long as 90 minutes, hot water supplied from the water heater can cool in the water pipes by the time it is needed, causing the electric booster heater in the machine to work harder.

Even when hand washing takes more energy and water than automatic dishwashing, it is often less expensive when considering the cost of the appliance.  Dishwashers are primarily used as labor saving devices, and sometimes for health reasons since they often eliminate more bacteria in their cleaning process.  However, the machine can cost hundreds of dollars that may not be made up by the water and energy savings of the appliance.  Your own lifestyle and habits should guide your decision to purchase and use this appliance.

Tips to Save Water and Energy in Dishwashers

3. Use the Smartwash function to adjust for lightly soiled dishes.

5. When building a new home, locate water heater/s as close to the points of use as possible.

Before the advent of the modern clothes washer, laundry was a monotonous and in some ways painful undertaking.  Water had to be hauled by hand and boiled with a wood fire, then hauled again to the laundry tub.  When clothes were put into the tub with harsh lye, sal soda, lime, and borax, they had to be stirred or beaten by hand with a paddle.  Clothes were then rinsed with a “blueing agent” to counteract the bleaching effects of the washing process.  Tedious laundry days were thought by some people to be the origin of the slang phrase “Blue Monday.”

Used water was, again, hauled away by hand, usually after several uses.  These clothes were then wrung by hand and hung out to dry, assuming the weather allowed for it.  The heavy lifting, bending, and wringing were often exhausting, and depending on the number of people in a household, the task could go on for days at a time.

Starting from the later 17th century, there were thousands of patents to make washing easier.  However, the first motorized machines on drive belts powered by steam or gasoline came after the turn of the 20th century.  It was not until 1947 that the first top loading automatic washers with agitators were marketed by Bendix, GE, and Whirlpool, launching the modern era of home laundry.

In 2009, about 82% of U.S. homes used automatic clothes washers, which clean almost 400 loads of laundry a year.7.8    Most of the rest are served by machines in laundromats.  An older, inefficient home clothes washer can use about 12.2 thousand gallons a year, equivalent to 12% of an average Austin home’s water use.

Water in these appliances is rated by a Water Factor (WF): the number of gallons used per load ÷ the cubic feet of capacity of the washer.

While all of them can be made more energy and water saving than past generations of these appliances, agitator-type washers are generally the least efficient.  Top-loading HE washers achieve back-and-forth motion with wobbling plates, wheels, or disks.  Front loading HE washers repeatedly tumble clothes through water at the bottom of the drum.  Though front-loading clothes washers generally save more energy and water, this is not universal.  Of the top-rated models for water savings in April 2012 (WF of 4 and below), about 20% were top-loading.

Although there have been minimum federal energy-efficiency requirements for clothes washers since 1988, there were not even voluntary standards for water use until 2000 and no mandatory requirements until 2011.  Voluntary standards have been promoted primarily by two programs, Energy Star, and the Consortium for Energy Efficiency, to give interested consumers information to make informed decisions to lower their water and energy bills.

Chart 1 shows the progression of water efficiency.  Old machines had a WF of about 12.5.9  The federal standard in 2010 was 9.5, and the most recently imposed Federal Standard was 4.7.  The Consortium for Energy Efficiency standard in March 2019 was a much lower WF of 3.0, and the most efficient model on the market in 2019 had a WF of 2.8. 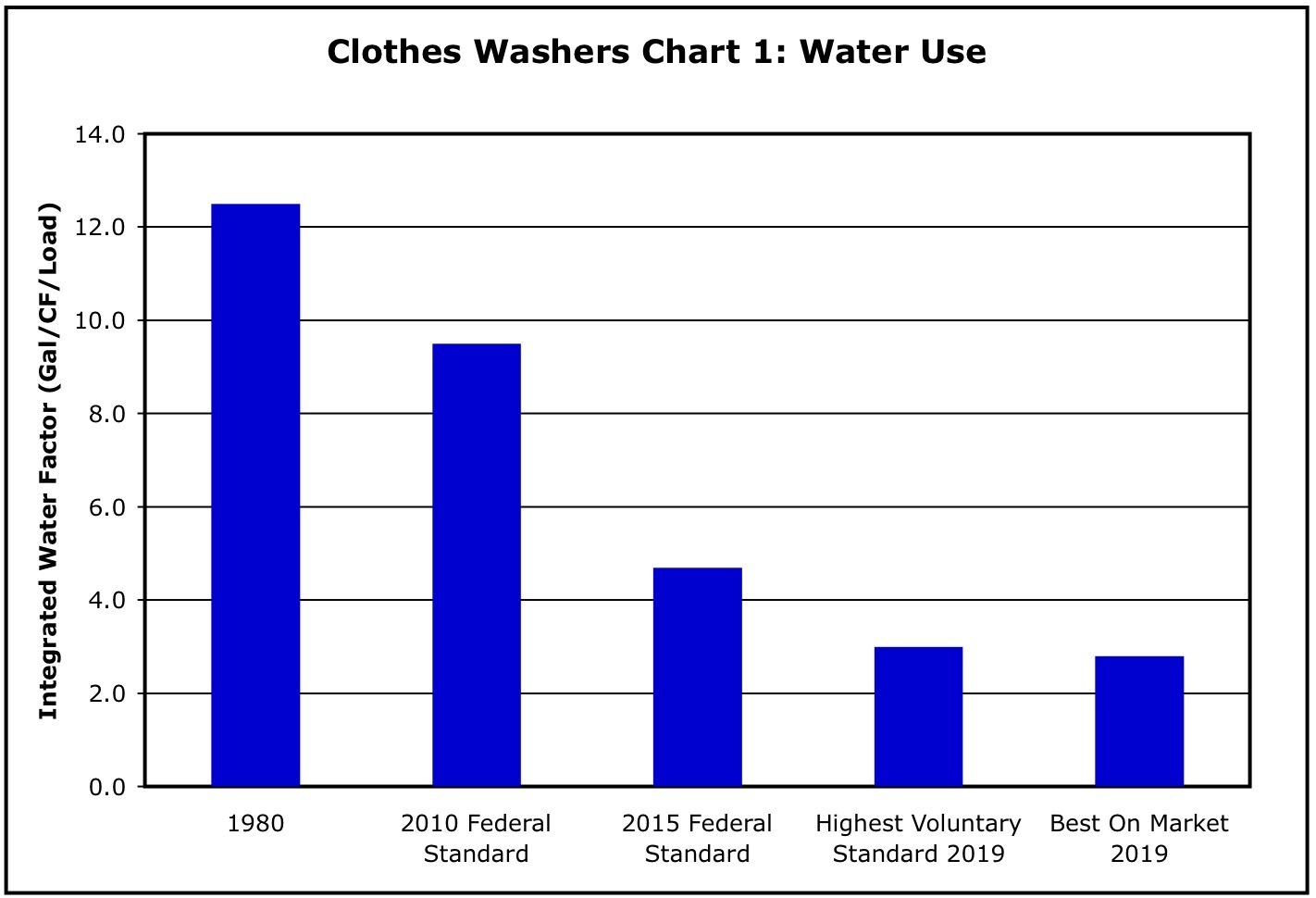 If you are wondering about the limits of water efficiency, a company called Hydrofinity replaces most water consumption by a machine primarily using plastic beads to clean clothes.  It reduces water use in commercial operations by 70 to 80%, though residential units were not sold in 2019.

Energy use is rated as a Modified Energy Factor (MEF), which adds all energy used in the washing cycle, including the electricity for machine use, water heating, and drying.  These 3 uses interact.  Cutting back on water use cuts back on water heating.  Increased spinning to remove more moisture from clothes cuts down on heat needed for clothes drying.  MEF has also changed dramatically over the years.  As Chart 2 shows, the difference between the average unit in 1980 and the top of the line model in March 2019 has risen from an MEF of 0.83 to 4.2.  It is contrary to WF: the higher, the better. 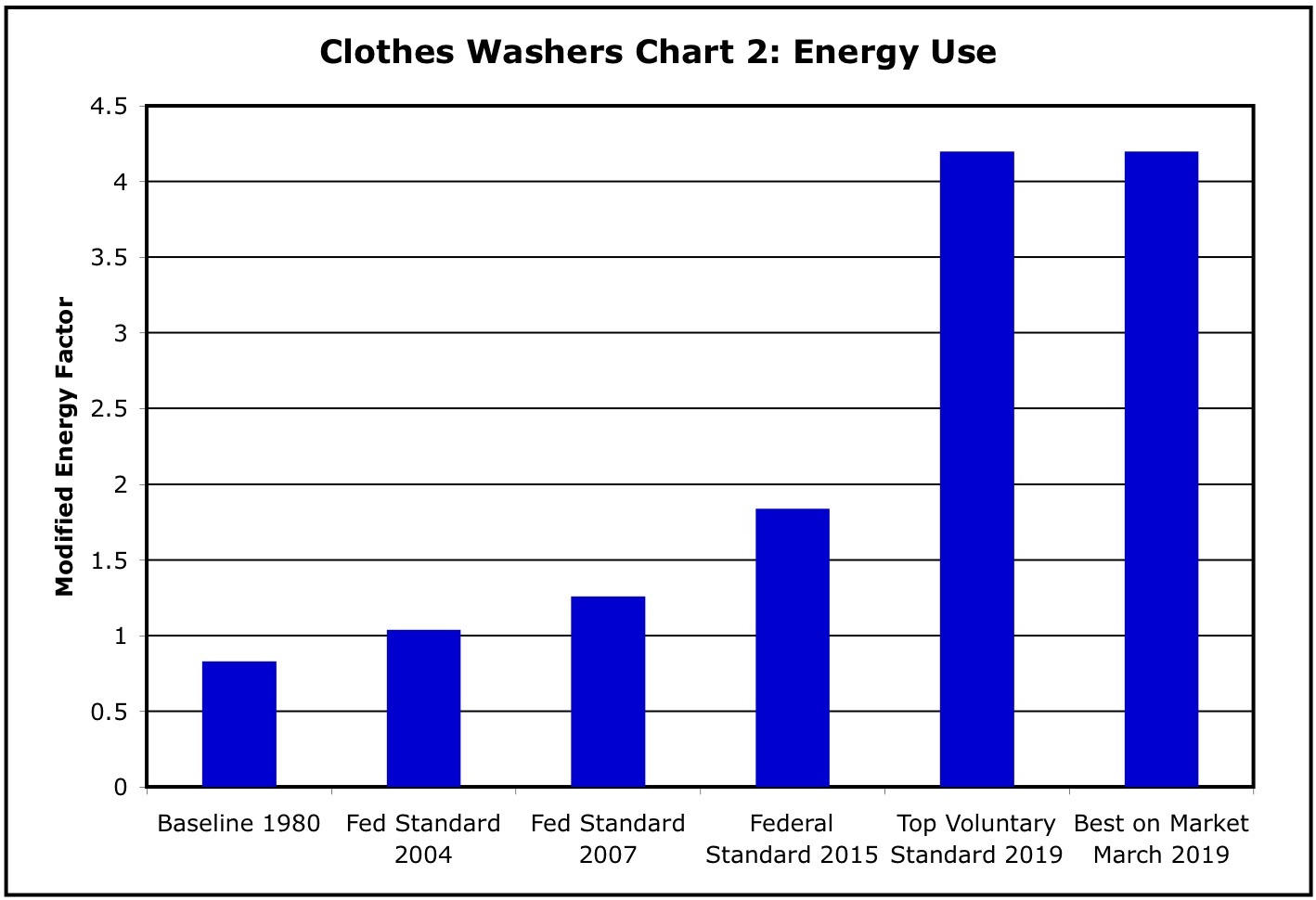 It is important to note that most of the energy use is not in the machine itself.  In a conventional washing cycle with an inefficient machine, roughly 80% of the energy use comes from water heating and fabric drying when natural gas is used for fuel.9  When electricity is used, the figure is close to 90%.  Switching to cold-water detergents and clothes lines will eliminate almost all energy use in the wash cycle.

• It is important to buy the right kind of detergent for HE machines.  Conventional detergents create more suds.  In HE machines, the excess suds may prevent water from properly rinsing clothes and may impede tumbling.

• HE detergents have a logo on the bottle designating they are for HE washers.  Note that some detergents state they are “HE Compatible,” which is not always the same thing.  If you are going to use such a product, experiment with it first to make sure it does not cause a problem.

• Front-loading washers have been shown to reduce detergent use up to 25%, in addition to running quieter and being gentler on fabrics (which lengthens their useful life).

The most energy- and water-efficient clothes washer and dishwasher models are listed on the Web sites below.