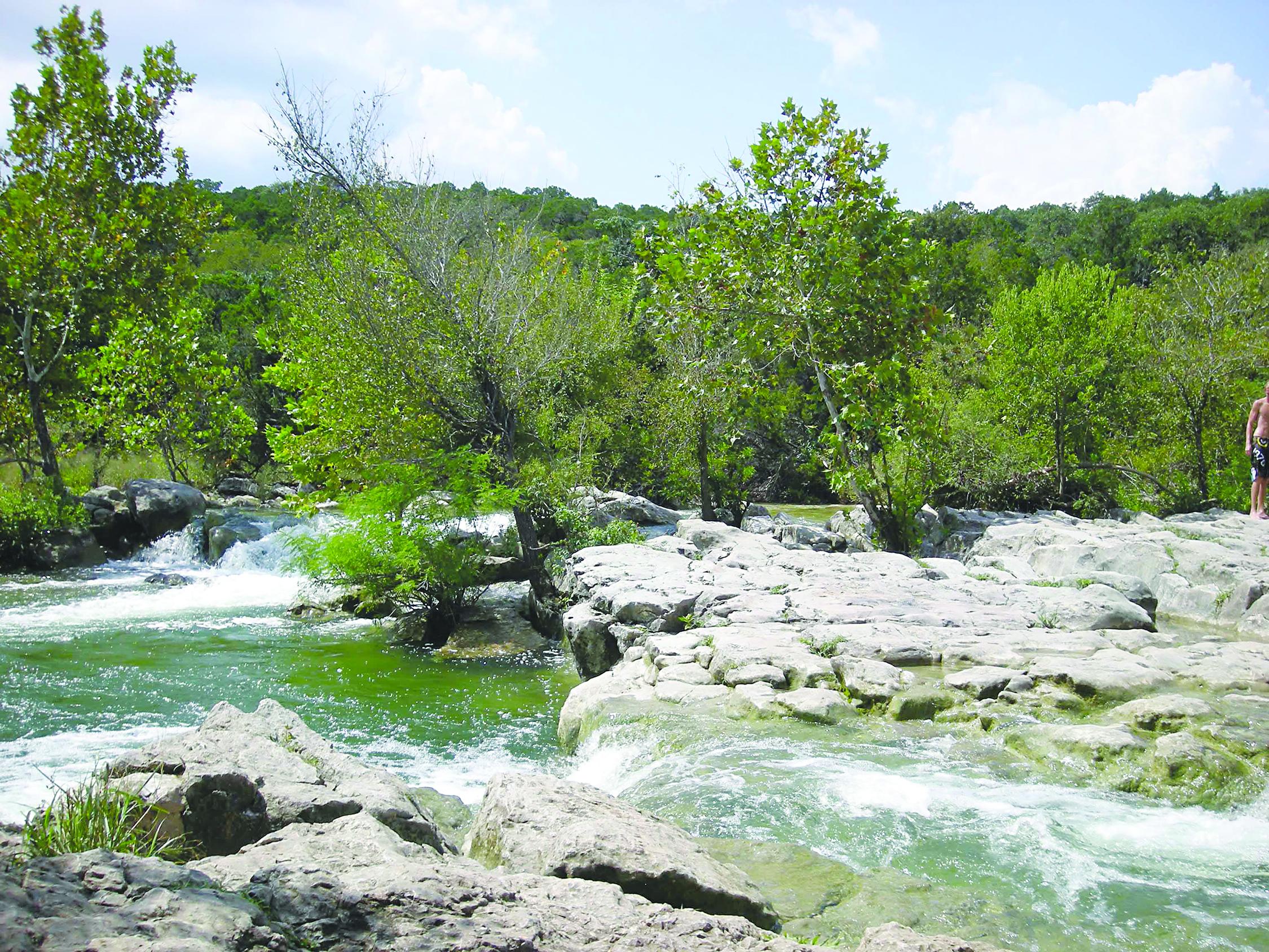 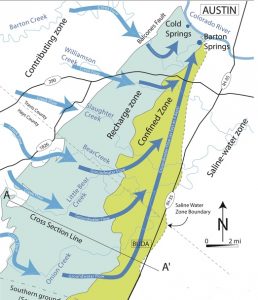 SBCA was founded in response to community concerns about the impact of development on the Barton Springs Edwards Aquifer.  Today, SBCA continues our commitment to conservation, advocacy, and education for the Edwards Aquifer, Barton Creek, Barton Springs, and all the creeks of Austin and Central Texas!

SBCA’s Creek Crew was founded in 2019. This group of young professionals volunteer, get access to exclusive outings and trainings, and explore the outdoors! 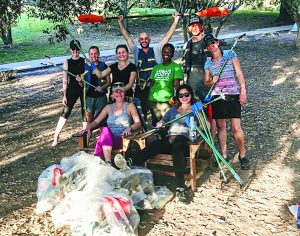 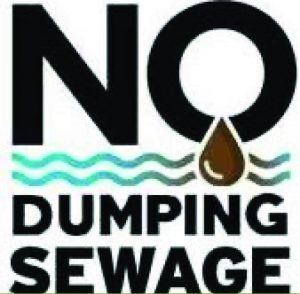 SBCA is a proud partner in the No Dumping Sewage Campaign, a community effort to save our Hill Country waterways and advocate for alternatives to direct discharge.

We support a ban on dumping treated sewage into creeks and rivers above the Edwards Aquifer, in favor of safer alternatives.

We also call on public officials and candidates to stand with us against direct discharge.

Join us, we need your help to keep Texas rivers and creeks clean! 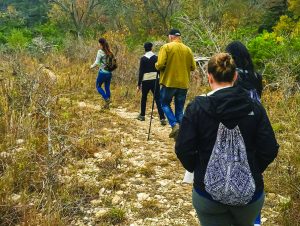 SBCA hosts guided hikes on a variety of topic throughout the year. Come join us to learn about local geology, flora, and fauna! We also host special events aimed at connecting people to our eco-region and mission.

EXPLORER’S GUIDE TO THE HILL COUNTRY:

AN OASIS OF LAND AND WATER 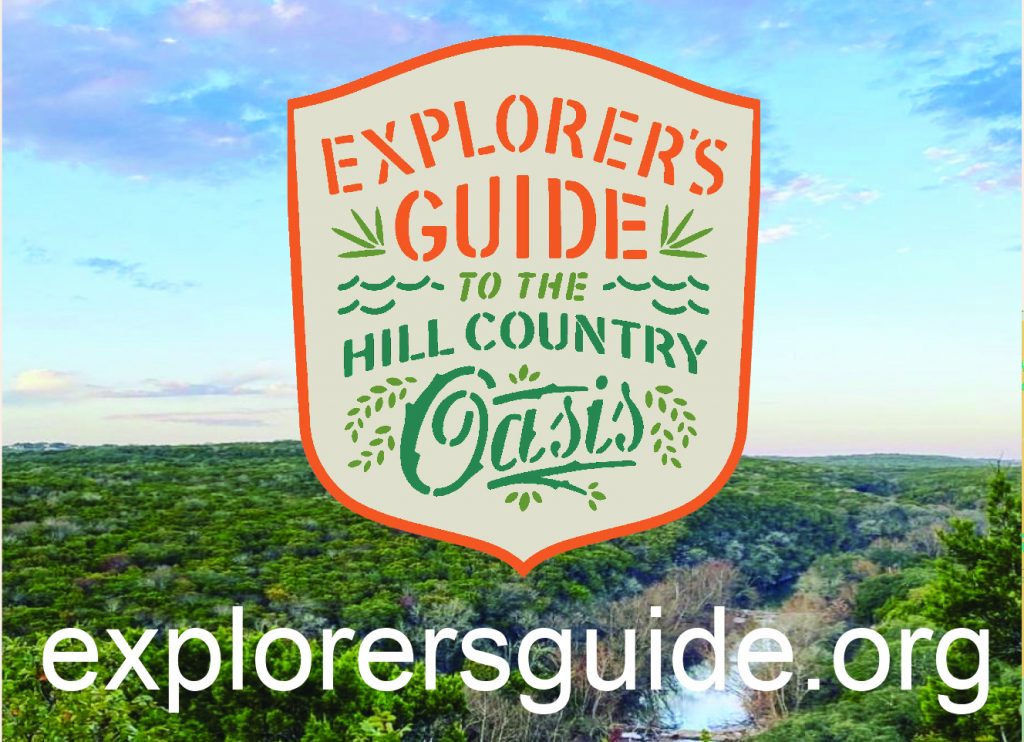 In Central Texas, on the edge of the Edwards Plateau, there are places of sublime natural beauty.

Over millennia, the forces of earth and water, wind and rain, have carved stories in the land waiting to be discovered by those who choose to look. Rain falls on the landscape, flowing through wildflower savannahs, Ashe juniper and oak forests, then into cypress-lined creeks. Rushing over rocks formed underneath ancient seas, these waters disappear underground to emerge from a multitude of springs and seeps miles away. This is where east meets west, north meets south. It has attracted humans for thousands of years and we all leave our footprints.

What adventures will you have in this special place?  What stories will you leave for those that come after? This guide can help you answer those questions. We can tell you, we can show you, but to appreciate fully the land and life of the Hill Country and the Balcones Escarpment, you must experience it yourself. So, go ahead; maroon yourself on this island of nature and find your own Hill Country Oasis. 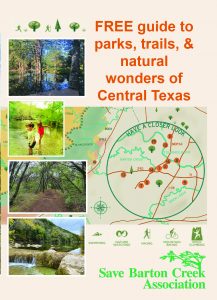 The Edwards Aquifer is the legacy of a shallow sea that covered much of Texas abut 100 million years ago, during the Cretaceous period. Thick beds of limestone formed from decomposing shells and other sediments. The Aquifer takes its name from these limestone beds, called the Edwards Formation.  Water slowly dissolved millions of interconnected holes in the rock, from tiny pockets to large caves and sinkholes, giving the rock a honeycomb appearance known as karst. The Edwards is exposed along the Balcones Fault Zone, where faulting about 10 million years ago shifted the rock layers. Those rocks on the west side of the fault are older and lie below the Edwards.  Faulting created many fractures that allowed for water to infiltrate and continue to dissolve the Edwards where it is exposed at the surface. This area is called the Recharge Zone.

The older Glen Rose formation is found at the surface west of the Balcones Fault Zone. This area is called the Contributing Zone because creeks run across this less porous rock eventually reaching the Recharge Zone where water can infiltrate into the aquifer.  Seeps and springs such as Barton Springs occur in the Artesian Zone, where the Edwards is confined by overlying, less permeable rock and the level of water in the aquifer is higher than the ground’s surface forcing flow through cracks and fissures.

What is your watershed? 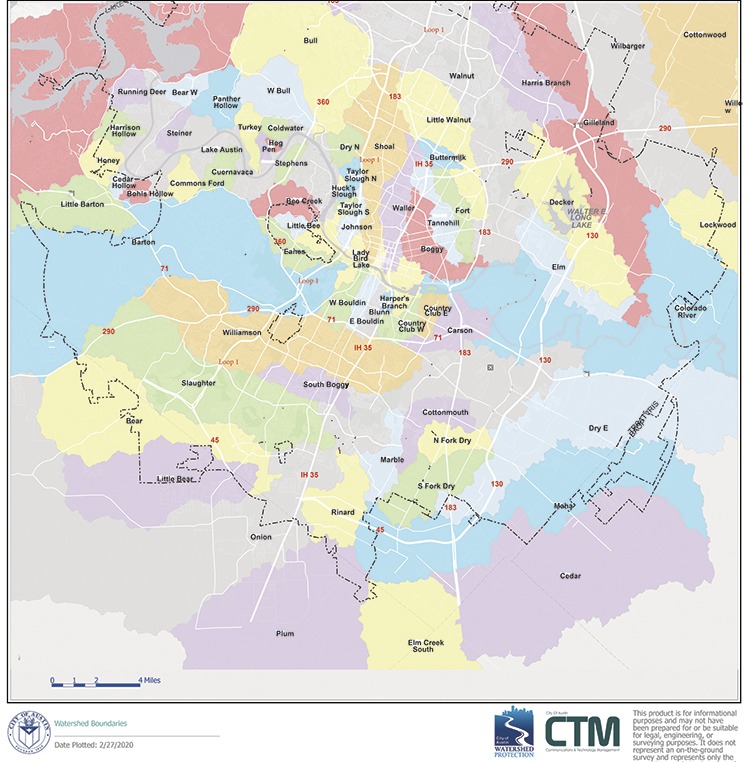 Watersheds are the land area that channel rainfall into creeks, streams and rivers. No matter where you live, you are in a watershed; in fact, more than one. Let’s say you live near the intersection of IH35 and William Cannon Drive. You are probably in the Williamson Creek watershed connecting you with all those that live both up and downstream from you. Williamson Creek feeds into Onion Creek so you are part of that watershed as well. Onion Creek flows into the Colorado River, one more, much bigger watershed. The waters in the River travel to the Gulf of Mexico, so you are living in that watershed, too.

To protect our waters we need to understand those connections and find ways to work together. Maybe it is time to find what watersheds you live in, and begin to understand what you can do to keep our creeks healthy and clean. Our children and our children’s children will thank us for allowing them the privilege of connecting with the waters of life.