Texas – Where the Water Runs Uphill

The average adult needs about a quarter gallon of drinking water a day to survive.1  If you add up all the water used in Texas for her cities, food production, industries, and electrical stations, the average use is 600 gallons per person per day.2 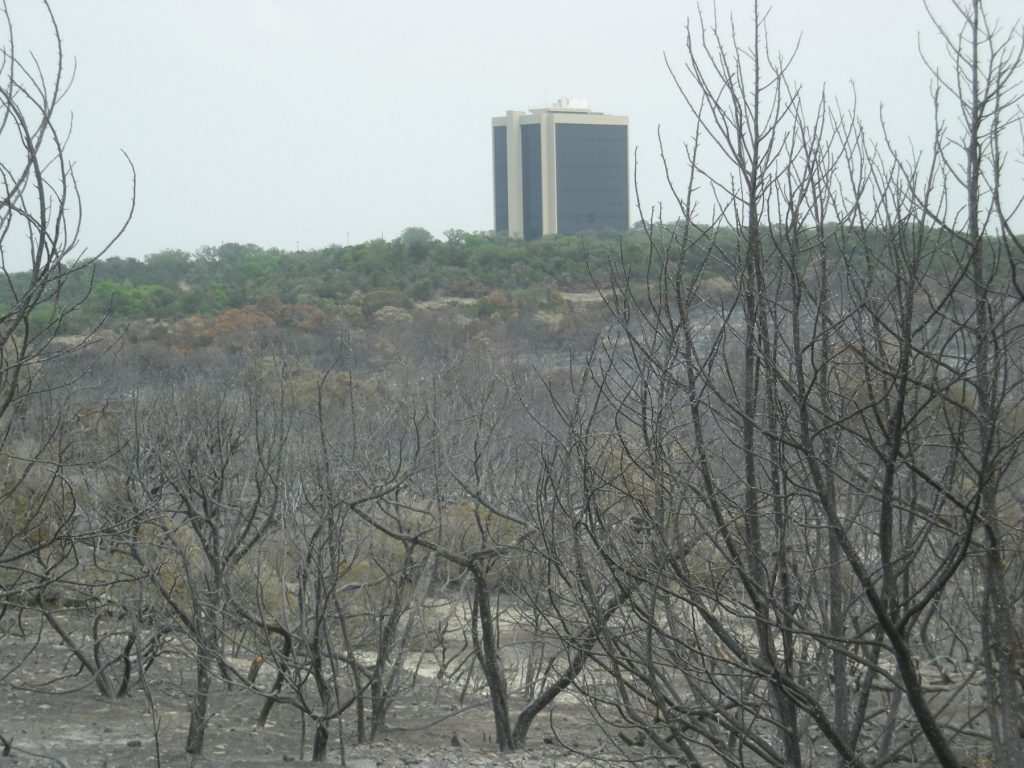 Drought has been described as the most uneventful of natural disasters.  Unlike volcanoes, earthquakes, floods, hurricanes, and tornadoes, there is not much material for adventure movies–directly anyway.  Though drought can be as merciless as any other natural event, it is slow in coming, can last for years (sometimes over a decade), and its toll on human behavior and welfare is usually extracted gradually.  But not always.

It was a bright, sunny, brisk Sunday afternoon in April.  I was in my home office attempting to complete a report (ironically) on water conservation when a loud crashing din echoed from my metal door downstairs.  I was barely dressed, preoccupied, annoyed, and went downstairs aware that this pounding was not going to quit until I answered the door.  I asked who it was from inside.  It was my next-door neighbor yelling through the door to clear out.  There was a wildfire on the way to burn the whole neighborhood!

He urged me to come outside.  From our vantage point on the hill overlooking a greenbelt, he pointed to the fire being whisked toward us by 35-mph winds about a quarter mile away.

You can’t exactly argue with a fire.  I put what I was working on in my car, and mentally prepared to evacuate. I should have grabbed the few possessions that I would have had time to save.  But I didn’t.

Instead, I vainly tried for several minutes to hose down my house and yard.  When the embers started raining down, the garden hose had all the fire-preventing effectiveness of a squirt gun, a mockery of the fire hose that was really needed.  The smoke was blowing in so thick that it was all that could be smelled.  Soon visibility was fogged at one or two hundred feet, and the rising heat was now apparent.  It was evident from the heat, and tops of the flames licking up the dry trees toward the top of the hill my neighborhood was located on, that I could not keep up the pretense of protecting my home any longer.

As I shut the hose off, an unknown person dressed in short pants and a T-shirt picked up the hose and turned it on again.  I watched him with both admiration and disbelief.  You might say he was underdressed for the occasion, and he had no ventilator.  The fog of the smoke got even thicker.  Through the wind and noise of the approaching fire, I yelled at him to leave at least three times.  “It’s not worth it!”  I screamed, and put my hand on his shoulder.  But from the background of the wind and approaching fire, he probably barely heard me.  He certainly didn’t stop.

The police were driving up and down the street with loud amplified warning signals, forcefully ordering people to evacuate.  I didn’t need a lot of persuading.  I was worried about the man with the hose, but he would not give up.  I got in my car and drove two blocks away to the nearest intersection.  I was nervous about leaving my house, but police were not letting anyone back in the neighborhood.  I swear the smoke was so thick that you could not see houses more than 200 feet away.  Sight of my own was lost in the haze.  I thought the whole neighborhood was going to go up.  Fire engines were lined up 6 deep on one side of the street as the firefighters prepared to troop in on foot.

There was nothing I could do but worry, so I left the area to drive to a friend’s house with a spare bedroom.  I wondered how many days or weeks I would be sleeping there.  The traffic from the evacuation of the neighborhood was backed up for at least a mile.

The Oak Hill Fire, as it became known, began shortly after noon on April 17, 2011.  It started on about 140 acres of vacant land located between the Austin Community College Pinnacle Campus and residential neighborhoods built in the 1980s and 90s.  My own home sustained minor damage.  My next-door neighbor’s house was totally destroyed, along with 3 other houses within a block of me.

That the fire destroyed or damaged only 20 homes was a minor miracle.  Despite formidable odds, Austin fire fighters performed masterfully given what they were confronted with.  As well as the sheer size of the area that needed to be covered and high winds, firefighters were experiencing low hose pressure caused by so many hydrants being on in the same area at the same time.  There was plenty of water, but the supply lines of the hydrants of the region were just too small to keep up with the demand.  At one point, helicopters were dropping coolant on the raging fire, while the besieged residents below literally cheered them on.

Over a period of the next few months, a number of memories were etched, many ironically good.  I witnessed a great deal of good will from the surrounding neighbors.  Some churches “adopted” a family displaced from their homes.  This was true charity, not hypocritical pretense that I have witnessed too often.  There were benefits to help the victims; at least one uninsured house was totally rebuilt by such donations.  Neighbors went to considerable trouble to rescue neighbors’ surviving possessions from derelict houses.  The City’s solid waste services division made numerous free pick-ups to help haul off the debris from the neighborhood.

I also witnessed, if not cruelty, at least insensitivity, as hoards of “disaster tourists” descended on the neighborhood to get a first-hand view.  I swear if I had a dollar for every such visitor, I could have eaten well for two or three years.  Building remediation companies canvassed the neighborhood.  At one point it was so bad that the police set up perimeters and tried not to let strangers in without permission of the residents.

There were even looters who tried to enter some destroyed houses.  Why one would risk their life to go through the shell of a destroyed house when it was apparent that nothing of value was left was beyond me.  However, many criminals are not that bright.

Who do you blame for the fire?

• The event was initially blamed on a vagrant who drove into the land and started a cookfire that the wind blew out of control.  When emergency crews arrived at the scene, he was asked to leave and did not comply.  He was arrested and charges were filed, though they were eventually dropped for lack of evidence.

• A friend and neighbor of mine who studies climate science believes the fire was related to global warming.  He believes that dry wood and lower soil moisture will become prevalent as the “new normal” of hotter, drier climate is exacerbated by the Greenhouse Effect.

• According to neighbors who had lived there longer than I had, the greenbelt behind me had been infested with cedar choppers.  After poaching trees for posts, they were leaving the limbs to decay on the forest floor.  In my opinion (based on personal observation) there were dozens of tons of dead wood lying on the ground to make a wildfire much stronger than it would otherwise have been.  To my knowledge, the landowner did nothing to clear the land of this hazard.  As of this writing, dead slash is still lying on the unburned portion of the tract.

• To say that the houses in the neighborhood were not built with fire in mind would be the Austin understatement of 2011.  States such as California and Colorado have developed special building codes for structures in the “wildland-urban interface.”  After the fire, Austin began to develop a similar strategy.  The revised code will not, however, mandate retrofits for existing houses.

Who do you blame?  The vagrant?  Coal plants?  Cedar choppers?  The landowner?  The homebuilder?  The homeowners that could have done more to protect their buildings?  Go figure.

But the fire occurred 5 months into the driest 12-month period in the recorded history of the state of Texas.   Not that it should be a surprise, but about 85% of the acres scorched by Texas wildfires between 2002-2011 occurred in years with below-average rainfall.3

This was my own personal experience with the drought of 2011.  Up to that point, the Oak Hill Fire was one of the biggest disasters of its kind in Austin’s history.  When the fires of September claimed 53 square miles of Bastrop County just east of Austin and took 1,600 homes, the Oak Hill disaster seemed almost inconsequential.

In the shadow of the record drought of 2011, the theme of this edition of the Directory is water.  The urgency is keenly fixed in the minds of many Texans.

An inside joke among water professionals is that drought is part of the “hydro-illogical cycle,” where people worry about water only as long as there is a shortage.  When this shortage occurs, people are more likely to take action even when the costs for more new supplies are expensive.  That is exactly what  happened during the 1950s “drought of record” in Texas.  Most of the state’s reservoirs were completed after this record event, many as a direct response to it.

Texans are once again taking notice, and many would even vote for funding projects that provide for long-term needs.  However, while the visceral effects of the drought were experienced on a daily basis, the complicated solutions, and lack of solutions, are not generally known to the average person.

The truth is that most of the “easy water” projects are gone.  There are very few places in the state that are suitable to create new reservoirs.  Zealous opponents who live on or near the areas targeted for inundation do not want outsiders to claim their birthright.  Environmentalists are alarmed at the risks to wildlife.  Fiscal conservatives are angered that the cost is just too much.  Pure groundwater close to cities is not in great supply either, and several regions of the state are “mining” their groundwater faster than it can be replenished.

Alternatives to new reservoirs, such as pipeline projects to existing lakes and desalinating brackish groundwater supplies, are viable supply-side options, but many are quite expensive compared to existing supplies.  The costs of some of these projects rival those of the new reservoirs themselves.

Other strategies, including conservation and water reuse, are also being seriously considered as partial solutions.  There are precedents for them, but it is conjecture as to how widely and well these strategies will be adopted given the cornucopian, water-rich lifestyle that Texans have become accustomed to.

There have been a number of good writers covering Texas drought and water shortages over the past two years.  I do not want to rewrite their stories.  Instead, my goal is to try to give an overview of the entire state situation.

If there is a central message to this article, it is to point out the near-impossible task of providing for the water needs of Texas without either large increases in costs or creating a water-efficient economy.  Both might actually be necessary in the long term.  Exploding population, erratic climate, even more erratic climate conditions caused by global warming, expensive and insufficient infrastructure, and prodigal lifestyles have created a situation where Texas can no longer provide for the insatiable thirst of all who come here. 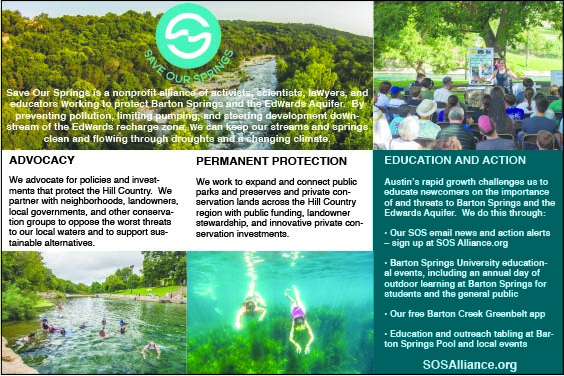